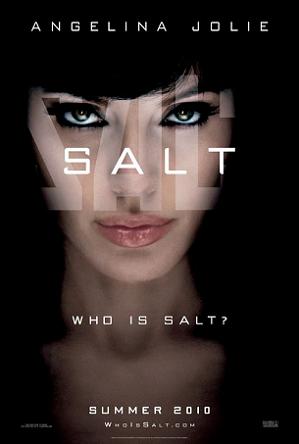 Weak story links, lazy plotting, wrong point of view, unsatisfying endings… Although Chez Morris we’ve taken time off from writing, we’ve seen some DVDs that have roused me to write posts of protest. So, to keep your critical faculties ticking over until life resumes as normal, I thought I’d share them with you in this five-part mini-series. (And yes, beware spoilers…)

Salt starts well enough. Angelina Jolie’s character, Evelyn Salt, is preparing for her wedding anniversary when she discovers she is not a CIA officer but a Russian sleeper spy – and is given an assignment to assassinate the Russian president. Her husband is kidnapped, and she goes on the run. Pretty soon she finds her husband, just in time to see him killed. For the rest of the film, she carries on with her mission, tries to avoid capture and flushes out the real bad guys.

Writing sin 1: breaking the connection with the audience In the commentary the director, Philip Noyce, reveals they cut a scene from the middle, in which Salt is interrogated by the CIA after apparently assassinating the Russian president. She tells them she had to look as though she was going on with her Russian orders because the Russians have her husband and this is the only way to find him. Noyce said he regretted taking the scene out because it ‘broke the umbilical cord with the audience’.

With this scene in the film, she is struggling to rescue her husband – and so we are rooting for her. If it is cut out we have no idea what her motivations are, and are left only with the question of whether she assassinated the Russian president or not – a character we have not been made to care about, and an action whose consequences to us are remote and theoretical. For the rest of the film we are wondering whether she is a patriotic American or a Soviet baddie, but again this is impersonal. What the story made us care about at the beginning is whether she loses her husband. When they discarded that from the film, they cut out its heart.

The director’s commentary reveals there are three possible endings to Salt. In the first ending, she kills her Russian handler (who earlier on killed her husband) – thus ending on a note of emotional closure. The test audience didn’t like it – possibly because without the earlier umbilical cord scene it looked glib.

So what did they do instead? In the released version, Salt is unofficially allowed to escape on condition she kills the other sleeper spies – which looks like it’s leaving the treadmill on for dozens of sequels. The third ending is a variation on this – a news bulletin hints that the new US president might be another sleeper spy. This is intellectually clever but not emotionally –because we haven’t been made to care about the consequences of that. Plus, we can hear that cynical sequel treadmill grinding.

Endings do have to be clever and surprising, of course. But they also have to tackle what the audience most cares about. The revenge killing of the handler would have done this, but only if the thread had been kept.

Tomorrow: Did You Hear About The Morgans?

This entry was posted on January 1, 2011, 1:53 pm and is filed under Inspirations Scrapbook. You can follow any responses to this entry through RSS 2.0. You can leave a response, or trackback from your own site.