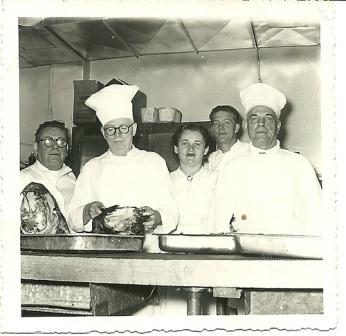 Critique groups are a great way to develop a critical sense and to experiment with what works. And to meet other people who are as dedicated to writing as you are. But too many cooks…

I’ve had this email from Vanessa, which is a fairly common problem.

During the past 12 months, I rewrote my novel 8 times as part of a critique group, and now I’m wondering if I should just go back to my first draft and start over. My book is different now, in some ways better, in some ways worse. I’m not even sure I can work with it in its present, 8th incarnation. I’m feeling a bit discouraged and don’t know how to recapture the original freshness. I think there are some good changes in the revisions, but also a lot of bad direction. How will I sort through it?

Discounting the fact that some of the advice might be misguided, inept or even destructive, even the most accomplished critiquers will offer different approaches when they spot a problem. You get a lot of input and you don’t know which to ignore. You try to knit them into a coherent whole and then realise you’re lost. And the idea is worn to shreds.

If you’re feeling like Vanessa is, you have to see this as is a brainstorming draft. It’s full of other people’s solutions – some good for your book and some a bad fit.

It is also a learning draft – in it you learned how to sketch a character, how to show instead of tell, how to introduce back story without clogging the pipes, how to pace. You could almost view some of it as exercises that have helped you to write better – but some of those exercises will not be pieces that need to be in this book.

Now you will undoubtedly be more practised and more aware. You need to take control of this brainstorming/apprenticeship draft and make a novel out of it again.

As a BTW: one thing you find as you grow as a writer is that other people’s solutions are rarely right for you. You have to pay close attention to the problem they have identified rather than what they tell you to do. If lots of people are saying something is wrong it probably is. But their solution is probably not right for you, even if they’re an accomplished writer.

Get back to your vision of your book

First of all, have you had a break from the novel? Here’s how you can tell. Do you view most of the manuscript as a problem? If you read it through right now would you be beating yourself up for what’s not going right?

Put it away so that you can read it without wanting to have a row with it.

When you’re ready, don’t read that latest version. Find the material from before the crit group, when it was just you and your idea. I always advise authors to keep their first draft because although there will be much to blush about, there will also be glorious tumbles of inspiration. What can vanish after multiple revisions is the raw inspiration and even if you didn’t express it well when you first wrote it down, the spirit of it is usually there.

Read through this and enjoy your original idea. Look out for the interesting edges that have been smoothed away and make a file of them.

Now to your manuscript

Then read the latest version. Make a copy so you can mess about with it. Paste into a new file the sections that your gut wants to keep and that you feel are an improvement on what went before. Clip away those you feel don’t belong – but don’t junk them because they may be useful later or for another book. Don’t try to rework anything yet – just examine what’s already there.

Any sections you don’t mind about either way should stay in the original file. You now have 4 files:

File 2 is your new essentials for this story. Now work out where the gaps are and how you’re going to join the dots. Yes it’s very much slimmer than the draft file, but it’s what you like about the book, in concentrate. Look at file 1 and consider how to add its contents in. Look at your ‘don’t mind’ file and figure out if you could work up any of the elements to fit with the new vision. From this you’ll build a new book that you do like from a draft you’re ratty about.

If you’re going to play with the story order a lot, you might find it useful to play the cards game from Nail Your Novel. If you’re not going to reorder you don’t have to worry about this.

Feedback is essential, of course, but you can get lost. This especially happens if you’re feeling your way, as first-time novelists are. While you have been writing with group feedback you have been putting the controls as much in their hands as your own. Now you’ve grown up a little, you have to close the doors, get to know the novel again and plan how you’re going to do justice to it.

Have you had experience revising with critique groups? And what would you tell Vanessa? Share in the comments 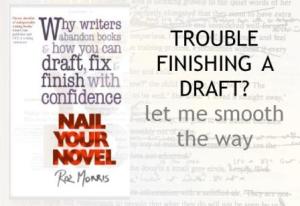 More about handling critiques and major edits in Nail Your Novel: Why Writers Abandon Books and how you can Draft, Fix and Finish With Confidence

This entry was posted on September 11, 2011, 7:24 pm and is filed under Rewriting, Rewriting, The writing business, Writer basics 101. You can follow any responses to this entry through RSS 2.0. You can leave a response, or trackback from your own site.