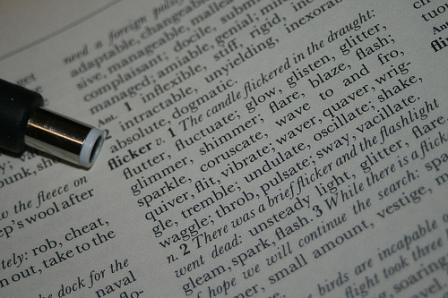 Last week I was interviewed by Joanna Penn of The Creative Penn, and one of the questions that attracted the most discussion is how to develop our use of language in our novels. It was the hardest question to answer in a short time, so I thought I’d give it more space here.

First of all, what is good language?

I see many writers who seem in thrall to their school English teachers, as if they are on a sponsored exercise to use the thesaurus as often as possible. We’ve all seen writing that waxes far too lyrical, and looks self-conscious and overdone – the dreaded purple prose.

But at least these writers have understood there’s an aesthetic involved. And I want to applaud them for trying to unpeel what’s in their hearts. Worse is the writer who goes for tortuous obfuscation (sorry), as if they want to scare the reader into feeling dumb. Just for a giggle, look at The Philosophy and Literature Bad Writing Contest. Here’s a taster, from an English professor:

‘If, for a while, the ruse of desire is calculable for the uses of discipline soon the repetition of guilt, justification, pseudo-scientific theories, superstition, spurious authorities, and classifications can be seen as the desperate effort to “normalize” formally the disturbance of a discourse of splitting that violates the rational, enlightened claims of its enunciatory modality.’

Now that’s criticism (as far as I can tell), not fiction, but I sense this writer imagines he is being profound and much more clever than his readers. This kind of writing is an act of superiority, not communication.

Good prose doesn’t try to put up barriers. It might make interesting word choices and deploy an image stylishly, but it wants to be understood – deeply and completely.

So before we write a good sentence we need clarity ourselves. What do we want the reader to feel?

Let’s take an example – describing characters. These are probably some of the most complex descriptions we might attempt as writers. Try these:

‘Someone advanced from the sea of faces, someone tall and gaunt, dressed in deep black, whose prominent cheekbones and great, hollow eyes gave her a skull’s face…’ Daphne du Maurier

‘He was a snub-nosed, flat-browed, common-faced boy enough, and as dirty a juvenile as one would wish to see, but he had about him all the airs and manners of a man.’ Charles Dickens

There is not a difficult word in either of those descriptions; the effectiveness comes from the writer knowing first what he wants to say.

Note also that those two examples are long sentences, but easy to read. The writer has a sense for how the words beat in the reader’s mind.

By contrast, here’s a famous sentence by Edward Bulwer-Lytton that strangles itself, quoted, funnily enough, on Wikipedia’s Purple Prose entry:

‘It was a dark and stormy night; the rain fell in torrents—except at occasional intervals, when it was checked by a violent gust of wind which swept up the streets (for it is in London that our scene lies), rattling along the housetops, and fiercely agitating the scanty flame of the lamps that struggled against the darkness.’

It’s not a bad concept but the writing is full of tripwires:

As I said, there’s nothing wrong with the concept of the sentence, following the wind and rain through the streets. But the writer’s thinking is cluttered, clogged and complicated.

The language dictates the way a story is experienced. It’s the filter over the lens, the music on the soundtrack, the way the shots linger or race across the screen. For instance, thriller writers would like you to be gripped by a pacy beat.

More than that, the language operates other senses. Patrick Suskind’s Perfume begins with a description of Paris purely through its smells. Russell Hoban’s Riddley Walker is told in its own post-apocalyptic pidgen English to connect you deeply to the narrator’s mind.

Both these choices of language are deliberate and serve the material.

In my interview with Joanna, we discussed how to develop our sense of language and an individual style, especially making notes as we read. One commenter afterwards said he used to feel self-conscious about what he wrote down, but now it’s part of his normal process of reading. Joanna says she’s got heaps of notebooks, which she doubts she’ll look at again. I don’t make physical notes but often find myself trapped by a marvellous phrase and reread it over and over, trying to decode the magic.

How do you develop your literary ear? Do you keep notebooks? Do you ever look at them again? Does that matter? Share in the comments

My Memories of a Future Life is now available in full, undivided form on Kindle (US and UK) and  also in print (and Amazon have knocked USD$4 off the price so grab it now). The price of the individual episodes will stay at the launch offer of 0.99c until 15 October, and will then go to their full price of USD$2.99. They’ll always be available, but if you want to get them at the launch price, hie on over to your Amazon of choice (UK, DE, rest of world) now. You can also listen to or download a free audio of the first 4 chapters over on the red blog.

This entry was posted on October 2, 2011, 2:02 pm and is filed under Rewriting, Rewriting, Rules, Writer basics 101. You can follow any responses to this entry through RSS 2.0. You can leave a response, or trackback from your own site.