Some novels should be written slowly 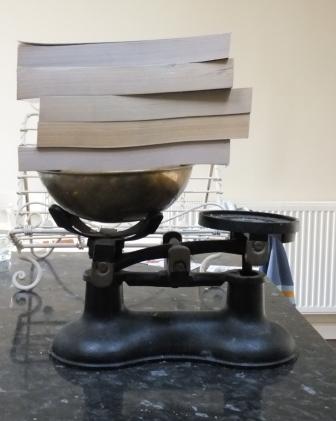 How long does it take to write a novel?

Here’s a typical post I’ve been seeing a lot lately. ‘A few hundred words a day add up to several thousand a month – which will let you bank a good two or three novels a year.’

We’re not counting the first book, of course. Then, you were running not just before you could walk but before you even learned to tie your shoes. Your novels after that will obviously be faster, but how fast? Two or three novels a year? Whole novels, finished, filleted to perfection?

If a goal like that turns you hysterically italic, then relax. It makes my serifs curl too. Not all novels can – or should – be written fast.

I’ve done fast writing. One year when I was ghosting, I knocked out four entire novels. (There they are on the scales, plus the one I started next.) I had the characters, it was a well trodden genre.

My own novels take me aeons by comparison.

I had the idea for My Memories of a Future Life in the 1990s when I was hopelessly unable to do it justice. A decade later I wrote it properly, which took at least a year of mining and quarrying. It wooed an agent, I did more edits and I hoped for another round before it was published. In the end I became my own publisher – diagnosed the last tweaks it needed and nuked 50,000 words. A lot of that time, of course, was learning curve. But My Memories of a Future Life could not have been written in four months.

The novel I’m revising again, Life Form 3, took more than a year. If you’ve been knocking around this blog for a while you might remember my anguished posts when it tested my faith quite sorely. I’ve now got great notes from a publisher who identified some sticky spots that I agree on. And finding the solutions has taken me three months.

Three months. In the alternate universe where I write like the clappers, that’s the time taken to write – and finish – three-quarters of a novel.

Although we do aim to finish our books, not fiddle forever, I worry that we are too obsessed by speed. It’s as if all writers are being encouraged to aim just for quantity – ‘I’ll have a pound of novels, please’. My writing pace isn’t unusual; I recently finished reading The Lessons by Naomi Alderman and was heartened to see a four-year gap between novel 1 and novel 2. She marinates even longer than I do.

You do what’s right for your material, your muse and your market. A thriller designed as an airport read is probably not going to get much better if you spend a year honing every paragraph. Series are faster too – you know your characters and where you’re going, so half the work is done for you already. A more literary, thoughtful work takes discovery. I sometimes worry that all I’ve got is muddle, and no model to tell me how to put it together. But with time, it comes.

If you’re well tuned to your audience and your genre, you can turn a novel out efficiently – but that doesn’t always mean fast.

Are you a fast writer or a slow writer? Do you feel pressured to write too fast?

authors, deepen your story, drafting, ghostwriting, how to write a novel, inspiration, literary fiction, My Memories of a Future Life, Nail Your Novel: Why Writers Abandon Books and How You Can Draft, Fix and Finish With Confidence, novels, Planning, polishing, publishing, revising, Rewriting, Roz Morris, writing, writing a novel - Nail Your Novel, writing business, writing fast

This entry was posted on March 25, 2012, 6:22 pm and is filed under Inspirations Scrapbook, Life Form 3, My Memories of a Future Life, The writing business. You can follow any responses to this entry through RSS 2.0. You can leave a response, or trackback from your own site.