How to choose an excerpt to showcase your novel 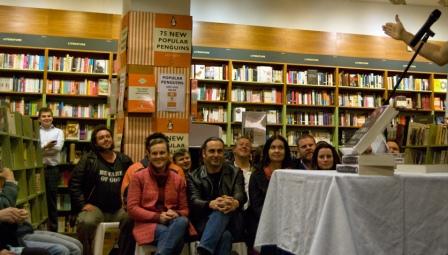 If you have to showcase your novel – perhaps for a reading, a book trailer or as an excerpt on a blog or website, how do you choose a piece to do it justice? I recently gave a reading at a book event in London – a landmark as it was my first – and choosing an excerpt was a little more tricky than I anticipated.

I’d assumed I’d read from the beginning. Surely that was a no-brainer. There would be no need to explain anything. It introduces the narrator, charms you into the story world.

But then I was listening to Radio 4’s Film Programme and noticing how they teased  a movie they were about to feature. There would be a short spiel about the premise and then a clip. It wasn’t the beginning, but the first plot point, the first irrevocable step into a new and perilous situation.

So although we hone our beginning so that it grabs, it’s perhaps not for a live situation. It’s for settling down with, not standing up.

Waiting to go on. I remembered to put my handbag down

So I looked at my first plot point. Out of context, it was too baffling. I tried my narrator’s first hypnosis session when she goes to the future. It was spooky, but much of its power came from the interplay with the two characters. It was as much about them as it was about what they were doing, but if you hadn’t got involved with them I feared it wouldn’t sizzle.

But not long before that was a scene where my narrator’s best friend is hypnotised back to the time of Jack the Ripper. This is the way hypnotic regression conventionally works, and I’d written it partly to ground the reader, to present them with the idea in familiar guise before I started to warp it. This excerpt is easy to understand if you come to it cold, it has plenty of drama and it’s narrated by a horrified friend. It’s self-contained. Perfect.

I had to fit into a strict five-minute slot. Reading at a pace listeners can keep with, that’s less text than you might think – though it seemed for ever with all those faces watching me. Five minutes gave me two sides of text from my print edition.

I didn’t use the excerpt exactly as it appears. I removed sections that you could only understand if you’d read the earlier scenes. An audience’s attention will wander easily and if you confuse them, you lose them. I also trimmed the description of what the hypnotised Jerry sees in the regression. In the book, it’s part of the veracity of the experience and the details are significant later, but in radio drama descriptions tend to be shorter. Writing that works for the eye doesn’t always hold the attention of a listener. But even if your excerpt will appear in print, consider whether you need the extra details that only make sense in the full work.

I had to allow for an introduction in my five minutes as well. My usual back cover blurb was too sweeping so I simplified to give my excerpt maximum impact: The narrator is Carol, a classical pianist, who is forced to stop playing because of a mysterious pain in her hands – and fears she may never play again. Her closest friend, Jerry, also has a secret burden – he has crippling panic attacks and is convinced they are caused by a trauma in a past life. In this scene Carol accompanies him to a secret theatre under a house in London, and a stage hypnotist. (If you’ve read the story you might spot I’ve taken liberties with my own ‘facts’. In the novel, Jerry’s curiosity about past lives isn’t as straightforward as this introduction suggests. But it’s all a listener needs to know for these purposes.)

Dammit, be a storyteller

As I said, I’d never read my work out loud before, even in the writer-friendly confines of a bookshop. This event was taking place in a pub. Not a place where people go to read. We had a stage and a microphone, but the crowd had their cronies and beer. They were too nice to heckle, but we had to win them over.

Delivery made a huge difference. Some readers kept their noses in their novels and never looked up. Their excerpts might have been great, but they were reading to themselves and after the first sentences the general rustle of conversation rose. The readers who commanded attentive silence looked frequently into the crowd and told their stories with a bit of swagger.

Dammit, we’re storytellers. We hold our reader with our conviction on the page, and stand-up reading needs that confidence too. (You can guess which option I favoured. It worked.) Afterwards I talked to a seasoned pro who had roared and waved through his piece and he confirmed that you could never overdo the drama.

Of course, take copies of your books. But those of us who were new to the crowd didn’t sell many copies, because people don’t usually buy the first time they hear about you. Or they might want ebooks. But they will take other souvenirs and it’s worth cramming in as much as you can – bookmarks, catalogues, flyers. I had dinky Moo cards, beautifully printed slivers the size of a French train ticket. All of them disappeared.

If you’re doing a reading, here are my tips for success

Thanks for the bookshop pic, katclay

Such was my experience. Have you got any tips to share, either as an audience member or from reading your own work at events? Share in the comments!

This entry was posted on July 29, 2012, 4:29 pm and is filed under Book marketing, How to write a book, The writing business. You can follow any responses to this entry through RSS 2.0. You can leave a response, or trackback from your own site.