Pace and story structure: a blueprint for keeping the reader gripped 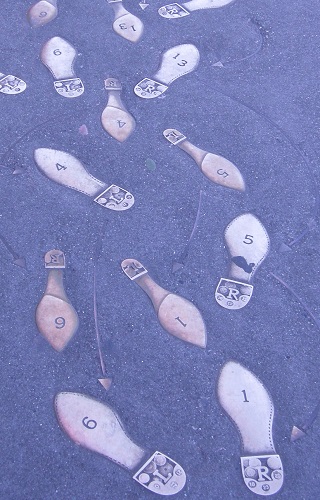 I’ve had an interesting question from Josephine of the blog Muscat Tales:

Can you talk about pace? How to speed up/slow down the action/plot – and when? Is there a general blueprint for this or does the story type dictate the peaks and troughs of emotion, action and change?

There’s much to chew on here. And I think I can provide a few blueprints.

In order to answer, I’ll reorder the questions.

First, a definition. What’s pace? Put simply, it’s the speed at which the story seems to proceed in the reader’s mind. It’s the sense of whether enough is happening.
When to speed up or slow down?

This comes down to emphasis. You don’t want the pace of the story to flag. But equally, you don’t want to rip through the events at speed. Sometimes you want to take a scene slowly so the reader savours the full impact. If you rush, you can lose them.

Here’s an example. In one of my books I had feedback that a scene read too slowly. Instead of making it shorter, I added material? Why? I realised the reader wanted more detail, that they were involved with the character and needed to see more of their emotions and thoughts. The feedback for the new, longer version? ‘It reads much faster now’.

More pace, less speed. It could almost be a proverb.

So pace is nothing to do with how long you take over a scene or the speediness of your narration. Whatever you’re writing, you need to keep pace with what the reader wants to know. If you linger too long on something that isn’t important, they’ll disengage. If you race through a situation they want to savour, they’ll disengage. But when you get it right … they feel the book is racing along.
How to keep the sense of pace?

This comes down to one idea: change. The plot moves when we have a sense of change. Sometimes these are big surprises or shocks or moments of intense emotion. Sometimes they’re slight adjustments in the characters’ knowledge or feelings, or what we understand about the story situation. A change could even be a deftly placed piece of back story. But every scene should leave the reader with something new.

This feeling of change is the pulse that keeps the story alive – and keeps the reader curious. In my plot book I talk about the 4 Cs of a great plot – two of them are change and curiosity. (The other two are crescendo and coherence, in case you were wondering.) 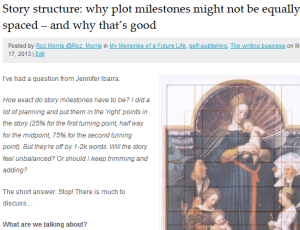 Where to place the peaks and troughs of action and emotion

And now to peaks and troughs. These are your major changes that spin everything in a new direction. As a rule of thumb, they work best if they’re placed at the quarter points (25% in, 50% in, 75% in). You usually need at least three, but you can have more if you like. Just space them out equally through the manuscript so you make the most of the repercussions. But that’s not a cast-iron rule (more here about general story structure).

The biggest question is this – has the plot settled into an unwanted lull? You might solve it by moving a pivotal revelation to one of these mathematically determined points.

Does the story type dictate the use of pace and change?

Why no? Because these principles are universal – a change is whatever will keep your audience interested. It might be an emotional shift. An earthquake. A person recognising a stranger across a room. A betrayal. A murder. A cold breeze that echoes the fear in a character’s heart. An assailant jumping in through a window. A line that pulls a memory out of the reader’s own life. It’s all change.

Why yes? Because the type of story will dictate the kind of change your readers want to see. Thrillers need big bangs and danger; interior literary novels need shades and nuance.

Why no, again? Because all stories need change.

Thanks for the pic Joe Mabel

There’s lots more about pace and structure in my plot book, of course.

So many readers of My Memories of a Future Life have told me they wanted to discuss it with a friend. So I dreamed up a special idea to mark the relaunch with the new cover. Enter the giveaway on Facebook and you could win 2 copies – one for you and one for a like-minded soul. Closing date is this Wednesday, 12 Oct, so hurry. This could be the beginning of a beautiful book club… but don’t enter here.  Follow this link and go to Facebook.

Any questions about structure or pace? Any lessons learned from experience? Let’s discuss.

creative writing, creativity, how to keep the reader gripped, how to plot, how to use plot points, how to write with pace, how writers keep readers captivated, is your book too slow, pace, plot points, story structure, three-act structure, writing

This entry was posted on October 9, 2016, 6:38 pm and is filed under How to write a book, Plots. You can follow any responses to this entry through RSS 2.0. You can leave a response, or trackback from your own site.