Posted by Roz Morris @Roz_Morris in blogging, Formatting for print on April 22, 2020

How can authors use blogging and social media effectively? How should they get started? How much time does it take to build an audience? Will you like it?!

That’s what we’re talking about this episode.

A caveat! These shows are a few years old now. We recorded this episode in 2015. Some of the platforms might not be so fashionable or useful for authors now. On the other hand, Facebook and Twitter are still going strong and are still the main places I meet readers and writers I want to know better. And blogs? We must have been through several periods where everyone declared blogging was dead – but you are here and I am here and this is a blog and none of it is dead at all.

Moreover, social media have been the entire mechanism by which I built a career as a writer under my own name, without a publisher (in case you don’t know, I have a big secret career writing books under other names). The finer points might have changed – and might well change again. But the methods and principles will still be the same. So I’m hoping this show will still be a useful primer.

Asking the questions is independent bookseller Peter Snell. Answering them is me!

Stream from the widget below or go to our Mixcloud page and binge the whole lot.

PS If you’d like more concentrated writing advice, try my Nail Your Novel books. If you’re curious about my own creative writing, find novels here and my travel memoir here. And if you’re curious about what’s going on at my own writing desk, find my latest newsletter here and subscribe to future updates here.

Two reasons to use your official author name on Twitter

Posted by Roz Morris @Roz_Morris in Book marketing, The writing business on June 29, 2017 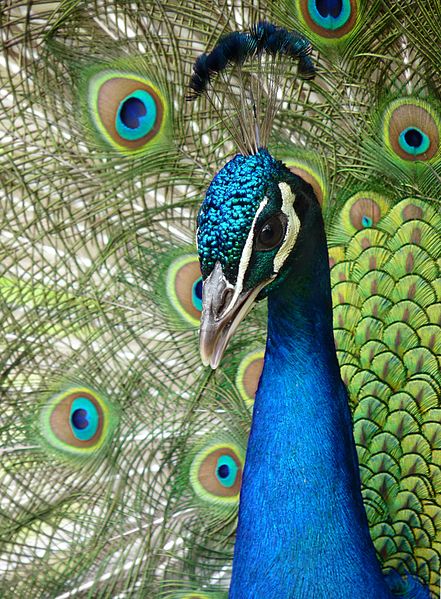 Are you using Twitter to build your online presence? If so, what’s your handle? Is it your author name or a readily recognisable variant? If it’s not, you could be wasting your time.

I love Twitter. For discovering lovely distractions, uniting in the face of shocking news, tripping over quips that restore faith in the human spirit – and, in a professional capacity, for networking. I’ve had numerous good opportunities that started with a humble tweet. And when I meet a writer I might get on with, I naturally seek them out on Twitter.

But sometimes that’s not straightforward. Eventually after a bit of a hunt and a beakful of guesswork I might track them down and discover they have a name that’s many species away from the name they write under.

Forgive my blue-faced cheek, but this seems to be a mistake.

1 It makes you hard to find

On Twitter, you really want to be found. That’s how the Twitter world revolves. Somebody shares your blogposts, or talks about your work. They use your name, which brings others to you.

So you want to make sure that any stranger could find the ‘right you’. And thus you can be introduced to a new and eager flock. This is incredibly powerful – unlike other social networks, you don’t have to already be friends with a person to start tweeting to them.

It’s as easy as calling their name.

Here’s how it goes. I’ll look up Jane Austen and find @JaneAusten – but she’s an estate agent, unlikely to be my author. I ‘ll look down the list at the other users whose real names are all Jane Austen. Which one is mine?

I squint at the avatars and the biographies. If I’m lucky she might be @AuthorJaneAusten or @JaneAustenAuthor, in which case, all is good. But she might be @Bonnetgirl5, or @InventorofElizabeth. Or @WriterInFarthingaleLane.

Finding her handle has now proved quite the expedition – which is not ideal in our attention-deficit world, and especially not in the 140-character-squeezed bird-brain world of Twitter. If I’m on a slow connection, or using a fiddly device that won’t tolerate a lot of searching and footling, I might not persevere any further because Jane Austen has made it too hard.

2 The much more important reason to use your name

You know how comedians traditionally sign off a set with their name? ‘Thanks for being a great audience, I’m Joe Bloggs.’ It’s the last thing they do before they leave the stage – make sure you remember their name.

They’re not going to trust that you’ll look in the programme, or the sign outside the pub, or that you’ll remember how they introduced themselves at the start. Their last task before they leave you for the night is to TEACH YOU THEIR NAME.

So why teach them @WordHoarder, @PagesBeforeBreakfastAtHelens, or @ToastAt10am? You may laugh, but these are name-forms that I see used by otherwise respectable authors on Twitter. Every day.

Yes, it’s easy. Just open your profile, type the new name in and see if you’re allowed to take it. Start at your profile page and look for your icon at the top. Hover over it and you’ll see ‘Profile and settings’ appear. Then look for ‘account’.

What if your name is taken? Yep, I have that problem. Read on.

Can’t use your actual name? Good solutions and not-so-good

Here are some of the tactics authors use to convert their name for Twitter.

By far the easiest thing to do is to put an underline in the middle. It’s as close to your real name as possible and doesn’t eat up many extra characters. That’s why I’m @Roz_Morris. Out there on the wires there’s another @RozMorris – who is actually rather quiet, but that’s another story.

Underlines in other places – beginning or end, or a double underline in the middle – are trickier for users to spot. A double-underline is hard to type reliably on some devices. If the underline option is already taken, you might be better adding something that makes it clear you’re the writer Jane Austen, not the vet or whatever. You could also preface with ‘author’ – @AuthorJaneAusten. Or put it afterwards @JaneAustenAuthor.

Initials – if you use initials I think you’re becoming harder to remember, but @AuthorJAusten at least looks professional. However, an initial is straying away from the name on the book cover (is she Jane, Jean or Josephine?). @JaneRRAusten gets both elements of the name in, but might be tricky to pick out from search results and autofills, or difficult to remember if typing from memory.

(Scenario: ‘oh darn, she’s JaneRR, not Jane like she is everywhere else – I always forget that’.)

Reverse your names – @AustenJane – Just my personal opinion, but I find this is easier to recognise at a glance, and have no problem remembering it the proper way round. Maybe that’s just the way my brain works. Your grey matter may differ. But – another point in favour of this format – Hootsuite seems to include swapped names in search results quite readily.

Numbers – you could add a discreet number – @JaneAusten1. Again, this is a personal view, but I find this to be a good solution that doesn’t interfere with the readability or memorability of the name, and it doesn’t cause search problems.

Character names or book titles – I don’t think this is such a good idea. Certainly it’s useful for people to know your books. But social media are about people, not products. Readers would rather connect with a person, not a figment, although @MrDarcy would probably be a notable exception, especially if tweeted from @RealJaneAusten’s brain.

(That’s another option if you have the chops for it: Real. Or Himself.). Back to book or character names, think long term – do you want to build a presence for one work when you might one day something completely different? For instance, if, like me, you swerve into a completely different bookwriting lane with a travel diary (which is coming along quite nicely, now you ask). But build your platform in your name, and you can use it for anything.

Abbreviations – @JaneAstn. The other day I came across an author who dropped some characters from her name to make a Twitter handle. It was infernally difficult to find her. What’s more, the result was so unintuitive that I kept mistyping – had she dropped the second r, or the vowels ….?

The abbreviations were probably logical, but people in the rush of Twitter don’t have time to learn the rules you used to create your name. Copying letter by letter is laborious and squinty. And anything that creates an obstacle might be enough to make a person lose heart in trying to contact you. Although Twitter and Hootsuite has an autofill option, you only have to misremember the contracted version to be tweeting the wrong person.

Cutesy or oblique versions of your name or anything that makes sense only to people who know you or your books – these are the most difficult of all. They’re fine if you only want to be found by your personal friends – and that’s how some people use Twitter. But it’s not ideal if you want to be visible to the wider public. 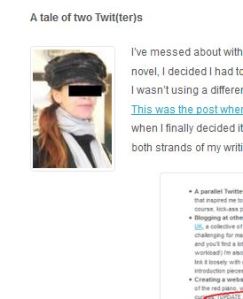 Once again: it’s easy to change your name! Red-faced relief…

And yes, I’ve flirted with less suitable Twitter names. For a while I was @NailYourNovel, because I was dividing my teaching side from my fiction-writing side. For my fiction I had a separate account, @ByRozMorris – more here about that, and why I stopped it).

My first Twitter name, though, was the epitome of unsuitable, and if you’ve been with me for a long time you can enjoy an in-jokish kind of chuckle. We live and learn.
Other tips to help good Twitizens

Anyone who mentions you on Twitter is doing you a favour. Help them to help you.

But most of all, make us remember your name.

Thanks for the peacock pic Jamain. And, update, in case you’re curious about Not Quite Lost, you can now get it at your favourite book outlet.