‘A harsh, frightening and lonely book to write’ – The Undercover Soundtrack, Tabitha Suzuma

Posted by Roz Morris @Roz_Morris in Undercover Soundtrack on March 20, 2013

The most haunting pieces on The Undercover Soundtrack delve far deeper than inspiration. My guest this week shares a very personal story. Her debut novel, about a teenage piano prodigy, didn’t come from a captured track in headphones. It was her own brother learning Rachmaninoff piano concertos in the room above hers. The character struggles with bipolar disorder, as she has in her own life. A later novel tackles an incestuous and doomed love between brother and sister, a harsh and frightening story that she says took a severe toll on her own mental health. Her fiction has won multiple awards and her brother is finishing his studies at the Royal Academy of Music. She is Tabitha Suzuma and she’s on the Red Blog with her Undercover Soundtrack.

GIVEAWAY: Tabitha has signed print editions on offer for the three most interesting comments. If you enjoy her post, let her know!

Posted by Roz Morris @Roz_Morris in self-publishing, The writing business on January 20, 2013 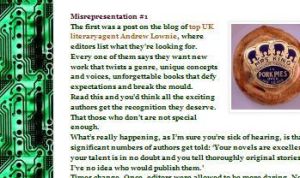 Apologies to those on New Year diets. Early commenters at my Authors Electric post have already let me know they are distressed at my excessive use of pictures of pies. But they are artistically necessary.

I’m venting about publishers’ porkies. (In case that doesn’t translate outside the UK; it’s rhyming slang. Porky pies. Now you see.) As more authors choose to self-publish for career and artistic reasons, the publishing industry is maintaining the fiction that all those with talent shall be welcomed with open arms, and that writers can’t do without their nurturing support. If self-publishers are ever to be considered as equals by the literary community, this has got to stop.

More pie (much more) at Authors Electric. Do come over and say your piece.

Posted by Roz Morris @Roz_Morris in Undercover Soundtrack on August 8, 2012

My guest this week was planning a novel about a cellist and imagined a romantic, melancholy instrument – until she sat in on a lesson at the Royal Academy. The young player’s gutsy ferocity was so electrifying that it threw the story into a different pitch – an exploration of wildness and taming. She is award-winning novelist Jane Rusbridge and she’s on the Red Blog talking about the Undercover Soundtrack for Rook

I just got a lovely email from Brian Klems, one of the online editors at Writer’s Digest, telling me Nail Your Novel is the Writer’s Digest Website of the week. This was a complete surprise – and shows you never know who’s reading your rants and divertissements. Anyway, I’m now extremely proud to be squeezing its badge onto my sidebar. (How did it get so stuffed…?)

It’s not one of those awards I can pass on, obviously, but on the plus side I don’t have to jolly you to read about seven personal habits you never knew I had. Indeed I’ll be a bit quieter than usual until June as I won’t be in grasping distance of a mouse. The Undercover Soundtrack is taking a break too, and will be back on 6/6.

In the meantime I’ve scheduled a rerun of Undercover Soundtrack highlights which you can catch if  you follow @ByRozMorris on Twitter, and I’ve prepared a stack of useful writing links to share on @DirtyWhiteCandy. You can also see them streamed here in the ever-growing sidebar (which, yes, I must get round to trimming).

Happy writing, see you soon – and thank you, Writer’s Digest!

Posted by Roz Morris @Roz_Morris in Interviews, Uncategorized on February 25, 2010

I have the great honour to have been given the Sunshine Award and the Fabulous Sugar Doll Blogger Award, both by Catherine Andrako of A Thousand Clapping Hands. Catherine, thank you! Catherine is an artist and a former dancer, creative to her last twirling atom, and I urge you to check out her site of ‘Art, Letters, Visual Delights and Strange Coincidences’.

Footnote: I also got a nomination from Roberta McDonnell of the divinely named Subliminal Spaces, so a heartfelt ‘thanks’ goes to her too.

As with most awards, there must now be speeches and games. For the Sugar Doll I have to tell you 10 interesting things about myself.

I once volunteered for an experiment in ESP. I sat in a room and was told to close my eyes and think of nothing while someone in another room beamed thoughts at me. A researcher put wires on my head to record my brain patterns and see if any communication was taking place. To help me zone out he put a swirly mandala on the wall and played me white noise through headphones. 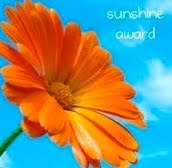 Honestly, I tried to think of nothing but it was just like an episode of The Avengers. Brainwashing, EEGs, far eastern symbols; and all in a leafy suburb of London.

With some difficulty, I locked in on the husky hiss in my headphones.

After a while I began to hear voices. Inside my head. Very faint, but definitely people talking.

Eureka, was this ESP? I heard the crackly whisper of a jingle, and then … was that Bon Jovi’s Living on a Prayer? It was Radio 1. Being picked up on the 30 metres of unshielded headphone cable from the white noise generator in the next room.

And so I went on for half an hour. Trying not to notice things that would obviously spoil the game, being sucked into busy diversions and then remembering I was meant to be relaxing. When my time was up, the researcher showed me my results unhappily. ‘This is what your brain waves should have looked like,’ he said, and pointed to some sleepy undulations along the bottom of a graph. ‘And this is you.’ He showed me a frantic jagged line like a seismograph about to freak.

‘You know your equipment is picking up Radio 1?’ I said.

‘No one else has heard it,’ he muttered, and I was out on my ear.

This probably tells you a few interesting-ish things about me.

2. When I was a child I wanted to be in The Avengers, getting up to peculiar derring-do in leafy parts of London.

3. At college I was in a band. So I know that long cables can pick up the radio.

4. I love using things for an unintended purpose, which is why I remember things like #3.

5. I can never resist an adventure to add to the writing diary, which is why I answered the advert to take part in the ESP experiment.

6. I like living in London because it’s the best place in England to find these sort of adventures. Although I have tried not to ruin anyone else’s experiments.

7. My best adventure was the time I turned up for a dance class at Pineapple Studios and found a film crew holding auditions.

8. I’m not good at right and left. And I took up dance just four years ago. But I decided what the heck.

9. To my utter astonishment I was hired. For two weeks of night rehearsals in a deserted station, I was a professional dancer.

10. As with all properly given awards, there should now be a musical interlude. This is what my friends were all scrutinizing, trying to spot me. Honestly, I’m there somewhere.

Speeches done. Now there’s the serious business of the onward nominations. I’m going to pass both awards on together, as Catherine did. I have to nominate 12 recipients, which isn’t nearly enough as I want to thank all of you who comment, encourage and spur me on, and the even wider circle whose blogs I regularly enjoy – as evidenced by the list on the right. But here goes – and don’t forget to leave me a comment with a link to your 10 answers, if you have the energy to do them.

Cat Woods at Words from the Woods

Natalie Whipple’s Between Fact and Fiction

John Simpson’s Running After My Hat

Janna Qualman’s Something She Wrote

awards, fiction, publishing, Roz Morris, who am I?, writing