To be continued… What everybody misses about chapter breaks

Posted by Roz Morris @Roz_Morris in Inspirations Scrapbook, My Memories of a Future Life, Rewriting, Writer basics 101 on July 31, 2011 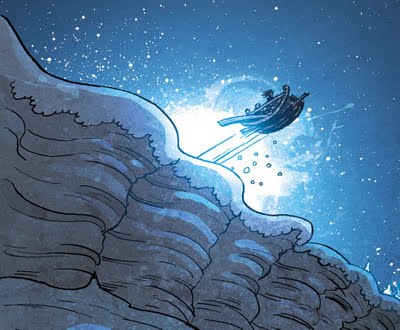 Are you putting your chapter breaks in the best place?

What’s the purpose of a chapter break? Is it to split the book into manageable chunks? Is it to give the reader a chance to have a rest?

If that’s what you think, you’re missing the point.

Sure, the breaks make the book look like an easier read. But what you do with a chapter break is offer the reader a point to stop – and then convince them to stay longer anyway.

So how do we know where to end a chapter?

Narratively, a chapter has to feel complete, and the ending needs to shift the story on a gear. There are probably three natural ways this happens, depending on the type of novel you’re writing:

Some manuscripts I see end too many chapters with closure. For instance, the character moves to a new town. That’s quite an old-fashioned way of writing, and worked fine in the days when everyone finished books as a point of principle. But these days, if we don’t feel a little tug of tension too, or enough curiosity about the consequences, it’s a sure opportunity for the reader to slip away. Possibly for ever.

You might think cliffhangers are the perfect solution for keeping the reader gripped.  And they’re de rigeur for certain types of genre, of course.

But some writers misjudge them. To take the expression rather literally, if you send a hero over the edge of a ravine we know very well that the chance of them splatting at the bottom is slim. The reader knows, if only subconsciously, that what awaits over the page is a rather dry sequence of physical explanations and that the outcome is almost a foregone conclusion.

Physical action is not what prose does best. Unless you can pull out a real surprise that makes a significant change (eg it’s the point where someone discovers they can fly) it’s probably not going to keep the reader addicted.

But these types of endings are focussing on the wrong outcome. Instead of ending the chapter with the question of whether the hero will survive (which is no question because they will), end it on the real moment of change – the point where they soar away on the breeze and think ‘oh my, I didn’t know I could do that’. That’s the real surprise for the character and the reader. It’s the story-changing point that’s worth grandstanding as a chapter ending.

(Interlude: In case you’re thinking this is an indication of the shenanigans in My Memories of A Future Life, it’s not. No one flies in that book, except with the assistance of an aeroplane. Various rules are broken in that story, but not the laws of physics. Now back to the post.)

What prose does best is emotions and questions. They’re what binds us to characters and stories – and they’re the best ways to keep your reader sitting up that little bit later. Most of your chapters won’t end on cliffhangers or closure, they’ll be lower key. But you can make sure every single one feels complete but tugs the tension tighter, answers a question but poses another.

When to put them in

I don’t split my books into chapters until very late in the editing process. I don’t think it can be done until I know the whole book inside out in its final form. Then I spend a lot of time chopping and rejigging, assessing where the natural turning points are for maximum intrigue. Sometimes I find an episode in the book is too long to be a chapter on its own, so I rework it and slip in a break half-way. All this helps maintain the pace of the story and give it irresistible pull power.

Your chapter endings are not where you give the audience a break. They are where you get them to recommit to the book.

Thank you, Dave and Leo at Mirabilis, for the picture!

My Memories of a Future Life will be available from 30 August, 2011

Chapter endings, chapters, cliffhangers, closure, deepen your story, fiction, having ideas, how to write a novel, length, My Memories of a Future Life, Nail Your Novel: Why Writers Abandon Books and How You Can Draft, Fix and Finish With Confidence, novels, page-turners, polishing, publishing, questions, Rewriting, Roz Morris, structure, tension, writing, writing a novel - Nail Your Novel