How to write a novel: following the strange – guest post on Writer.ly

Posted by Roz Morris @Roz_Morris in Interviews on April 16, 2014 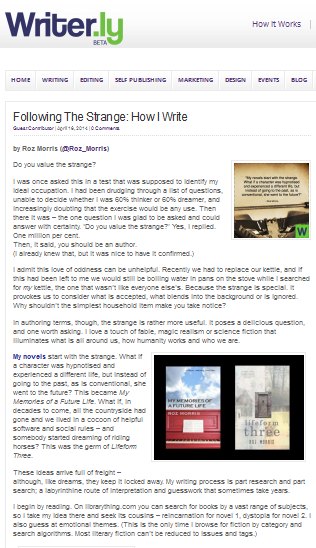 Have you ever filled in one of those questionnaires that’s supposed to tell you what your ideal job is? Whenever I did, I usually found them desperately disappointing – but then they probably weren’t meant to send people to precarious, impractical occupations like writing. Except that one day, I filled one in that did. And it did it with one excellently judged question: ‘do you value the strange’?

Not only did this prove there is only one job I’m really fit for, it also summed up what drives me to write.

Today I’ve been invited to Writer.ly, who asked me to describe how I develop my novel ideas. Expect a lot of head-scratching, thinking, running, shopping – and writing of notes that no one will ever see but me. Come on over… and tell me if you also value the strange …

Doctor Who and the infinite possibilities – how original ideas take time

Last week Dave had a piece in the Huffington Post about the day his father took him, age 6, to meet a Dalek at the BBC, and then to watch Doctor Who being filmed. That evening we dug out the DVD of the old black and white story he saw filmed all those years ago.

More riveting than that story, though, was a feature on the extras about how the series was originally devised – the forms it might have taken and how much refining it took to get to its distinctive shape. On and off, inventing Doctor Who took about a year.

Doctor Who: the quantum shifts

1 A sci-fi story about telepaths or time travellers, or a time-travelling police force, or scientific troubleshooters keeping experiments under control for political or humanitarian reasons

2 Characters are a handsome young male hero (Cliff), a well-dressed heroine age 30+ (Lola), a maturer man with a character ‘twist’ (no name yet). They are scientists with different skills operating from an HQ with a lab and a Sherlock Holmes-ish office where they interview people who need their help.

3 Scrap that, make Cliff and Lola teachers, and add a teenage pupil (Biddy) to get into trouble and make mistakes. Cliff is a hunk, because everyone likes a hunk. Maturer man is now 650 years old and called the Doctor. Their HQ is a time machine the Doctor has stolen from his people, an advanced civilisation on a distant planet.

4 Hey, what if the Doctor was a villain who wanted to travel back to the perfect time in history and stop the future happening…? (Stroke your chin now)

5 Hey, let’s call Biddy Susan and make her alien royalty. And Lola is called Barbara. Cliff is called Ian and he’s not so much of a hunk, more an average guy.

6 Susan is the Doctor’s granddaughter. And the Doctor’s a mysterious time traveller in an unreliable machine that disguises itself to blend in with its surroundings. Ian and Barbara don’t trust him, but they’re stuck in his ship. Conflict…. nice!

7 The ship won’t disguise itself. The series will be educational.

8 No, it won’t be educational, that sounds dreary and condescending. As you were.

We all do this

As those BBC dudes wrangled Doctor Who out of infinite possibilities, the questions they tackled were the questions all writers grapple with  –

Few ideas descend fully formed on a lightning bolt. All the writers I know spend time banging heads with their ideas, fiddling with prototypes that are discarded and even forgotten. Our stories start as experiments and hunches – and when you think about it like that it seems so magical and random.

Almost as magical as a grainy production still from nearly 50 years ago, where there might just be a small wonder-struck face.

Thanks for the pic Machernucha

beginnings, Daleks, Dave Morris, deepen your story, developing an idea, Doctor Who, having ideas, how to write a book, how to write a novel, Huffington Post, inspiration, My Memories of a Future Life, Nail Your Novel: Why Writers Abandon Books and How You Can Draft, Fix and Finish With Confidence, publishing, Roz Morris, William Hartnell, writing, writing a novel - Nail Your Novel, writing life