In your character’s shoes: give your everyman character a strong presence

Posted by Roz Morris @Roz_Morris in Creating a character, Writer basics 101 on January 12, 2014

Some central characters are intended to be a proxy for the reader – a person who’s thrown into a situation and acts as a conduit for the reader to have the experience.

However, there’s a big pitfall with this kind of character: writers are sometimes reluctant to make them people in their own right. They’re worried about being too specific and instead they create a bland nobody.

These are the symptoms of the nobody everyman:

– because the writer assumes the reader will apply their own reactions. But readers don’t want to do this. They want to share the character’s reaction. I particularly see this in writers who learn a lot of their storytelling from films and TV. But novels are an internal medium, a landscape of emotion, and the reader needs to be guided more.

In prose, if the character doesn’t react, it looks as though the event made no impression on them. In any case, you can’t guarantee what a reader’s reaction will be, and that it will be the one you want. (Readers certainly aren’t everymen!)

The character has very little history, background or personal preferences

Again, the writer is afraid of making the character unlike the reader, and so they don’t fill in any home background, hobbies or back story. This makes them look curiously empty. Think of when you meet somebody for the first time – there are certain things you want to know about them. What they do; whether they have kids; what hobbies they have. In real life, we need context about people. And so do readers.

Because the writer doesn’t want to presume any reactions, they make their everyman character wait around for the more interesting people to cause adventures. This can make us wonder why we are spending the most time with the dullest person. Even if the viewpoint character is surrounded by troublemakers and simply wants a quiet life, they need to fight back instead of being pushed around. That’s not to say the other characters can’t get them into scrapes; but our main character must also seem to cause some of the situations they find themselves in. If they simply wait to be shepherded, it’s frustrating to read about.

So how do we write an effective everyman character?

Is there even such a thing as an everyman character? We are all different. My reaction to a life dilemma won’t be the same as yours. If our characters are to be convincing, it doesn’t make sense to leave them as empty vessels for the reader to fill.

And besides, if we look at what readers respond to, it’s not as superficial as tastes, social background etc. Readers respond to something that’s deeper down – and that’s emotions that are universal for everyone: fear, difficult choices and dilemmas.

If you evoke those well enough, the reader will put themselves in that character’s shoes regardless of their circumstances or even the era the book was written. Think how many classic novels are still finding new readers because their protagonists strike a chord. A lonely orphan becomes a governess and falls in impossible love with her employer – Jane Eyre. A timid, inhibited girl is overwhelmed by her new position as wife in a grand house – Rebecca. These aren’t everyman characters by any means, but we connect with their stories and experience them vividly. It doesn’t matter at all that they don’t do what we would do, or that their circumstances are not like ours. They have loneliness, dilemmas and fears, which is enough to put us in their shoes. 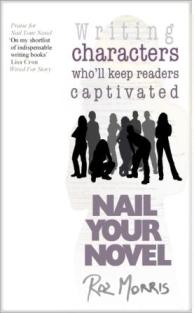 NEWSFLASH This seems a good moment to mention that I’ve got a whole bookful of advice on characters. And the eagle-eyed among you will notice that the title has been tweaked. Why? I realised the original title Bring Characters To Life was rather ho-hum and didn’t explain why you should go to the effort of making characters believable. So it’s now called Writing Characters Who’ll Keep Readers Captivated – which is, of course, what it’s all about. Plus it scores better for SEO, which should work magic in searches (nobody would think to search for Bring Characters To Life unless they already knew about it). The new cover and title will take a few days to percolate through all the sales channels, but if you buy it you’ll get the updated look. Do you think it’s an improvement?