Fates and Furies by Lauren Groff … under discussion at Literary Roadhouse book club!

Posted by Roz Morris @Roz_Morris in podcasts on February 5, 2016

This book is being read everywhere, apparently! Or it is in the USA, which is home of Literary Roadhouse. They invited me to be part of their book club podcast, where we spent a good hour getting our teeth into Fates and Furies by Lauren Groff.

Some of us adored it. Some of us grumbled about the very things the others loved. Such is the nature of a truly satisfying book club discussion. If that’s your bag too, step this way.

If you’re friends with me on Facebook you’ll already have seen this picture. Years ago I held a fancy dress party with the theme ‘mad, bad and dangerous to know’. My costume was The Masque of the Red Death, after the story by Edgar Allan Poe. Well this week, I was the guest of The Literary Roadhouse podcast, an online discussion group for short stories. Each week they choose a literary short story and gnaw over it for a good hour. If you want a conversation that cares about a story’s language, themes, resonances and whether it works, this is for you.

Even better, you can take part. Read the story before you listen, and you can tell them afterwards in the comments what you agree and disagree about. Indeed, they’d love it if you did.

So, to explain the splendid party picture you see here. Literary Roadhouse pick the stories by a random and bizarre game. I have only once in my life dressed up as a short story, and the hand of fate took it to Literary Roadhouse for my guest 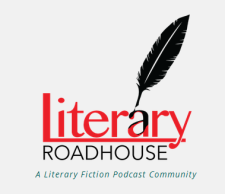 spot. Spooky. Hop over there now. If you dare.

Extremely serious question. If you had to dress as a short story, or ‘mad, bad and dangerous to know’, what would your costume be? You don’t do that sort of thing? Just me, then.

So You Want To Be A Writer? New radio show to get you started

Posted by Roz Morris @Roz_Morris in How to write a book, Interviews, podcasts, The writing business on September 29, 2014

Every week, my bookseller friend Peter Snell gets customers who ask him nervously: ‘how do I write’ and ‘how do I get published’? Sometimes they give him manuscripts or book proposals. I get emails with the same questions.

So we decided to team up for a series of shows for Surrey Hills Radio. If you’re a regular on this blog, you’re probably beyond starter-level advice, but if you’re feeling your way, or your friends or family have always hankered to do what you do, this might be just the ticket.

If you follow me on Facebook you’ll have seen the various pictures of us goofing with a fuzzy microphone, recording in the bookshop while customers slink past with bemused expressions. (Yes, that tiny gizmo is the complete mobile recording kit. It’s adorable.) So far the shows have been available only at the time of broadcast on Surrey Hills Radio (Saturday afternoons at 2pm BST), but the studio guys have now made podcasts so you can listen whenever you want. Shows in the back catalogue have covered

This week’s show will be on planning a non-fiction book and the show after that will be outlining a novel – and will also include sneak peeks of the advice I’ve been cooking up for my third Nail Your Novel, on plot. So you want to be a writer? We have the inside knowledge. Do drop by.

When to keep your distance: why you don’t always want the reader in the thick of the action 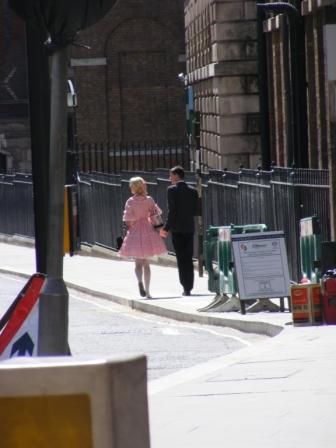 Most of the time we’re trying to put readers in the thick of the characters’ experience. But distance is also an interesting fictional technique with a power all of its own.

In Hitchcock’s film Torn Curtain, there’s a scene where the protagonist kills a taxi driver. Normally you’d expect scenes like this to be presented in close up. We’d see the struggle, the driver’s desperate fight and the hero’s anguish in taking someone’s life. We might wonder what the outcome will be.

But that’s not what Hitchcock does. The scene is shot from a distance, as though it is happening to someone across a road. Almost as if it’s not even happening to the protagonist.

There are no questions about whether the MC will succeed. The driver is killed, and that is that. The MC doesn’t even pay a price by getting hurt. He doesn’t flinch from what he has to do. The distance of the camera plays with our empathy, representing how the characters distanced themselves from the deed. And so we see a normal, married man forced to kill an innocent stranger in cold blood. We see the resources he has in his soul that will ensure he survives. What does it do to the viewer? It makes us complicit in an uncomfortable world. As if we have made that choice too.

In Persuasion, Jane Austen shows the final reunion between the lovers as though she’s filming it at a distance. It’s surprising, but allows the characters privacy in their moment – which is all the more touching.

Of course, you need to use distance carefully. I often see scenes where writers duck out of showing a key event, possibly because they didn’t feel up to writing it. There is a strong likelihood that if you pull the prose camera away, the reader will feel cheated. You have to make a careful judgement call. If there are any questions lingering, the reader needs to see what happened. But if the reader can fill all the blanks and be just as satisfied, it might be powerful indeed.

Every event we share in a story has an effect beyond just showing what happened. And distance can sometimes lend more power than a close-up. Like Hitchcock, you could create an interesting complicit effect, show characters turning a corner. Result? The audience is disturbed in a way that is far more complex and chilling. Jane Austen had spent so long keeping her lovers apart that we wanted them to be together. When they finally were she went one better – she allowed them to be totally alone. Result? Reader satisfied.

That’s just two examples. Give me yours and tell me why you think they work!

Oh, and (spoon tapping glass). My Memories of a Future Life is getting great reviews. Episode 2: Rachmaninov and Ruin, is limbering up for release on Amazon at midnight as 4th September turns into 5th. You can find episode 1 here and you can try the first four chapters on a free audio here

Alfred Hitchcock, audio, deepen your story, distance, fiction, free audio, Hitchcock, how to write a novel, Jane Austen, My Memories of a Future Life, Nail Your Novel: Why Writers Abandon Books and How You Can Draft, Fix and Finish With Confidence, novels, Persuasion, polishing, revising, Rewriting, show not tell, writing, writing a novel - Nail Your Novel, writing style