Posted by Roz Morris @Roz_Morris in Undercover Soundtrack on October 8, 2014

Music is at the heart of my guest’s story this week. The setting is 16th century Rajasthan in Northwest India, a landscape of temples and fortresses, jewel-toned textiles, blue skies and golden sand. It’s also the land of kathak, a stamping, rhythmic, hypnotic devotional form of dance practised in Hindu temples by girls who were wedded to the temple’s deity – and wealthy patrons who looked for companions. My guest wrote her story in New England, and listened to the rhythms of the traditional dance to conjure up her novel’s parched, colourful landscape and people, a place where rain was so rare that children would view it with terror. She is Anjali Mitter Duva and she’s on the Red Blog with her Undercover Soundtrack. 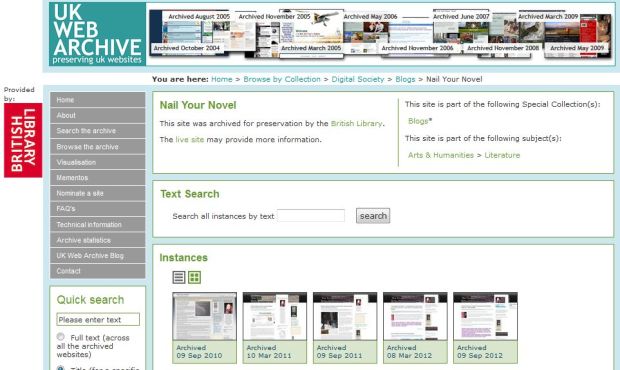 STOP PRESS! I just got a Google alert that this blog (I’m talking about Nail Your Novel now, not the red one) has been archived for preservation by the British Library as part of its special collection for Arts, Humanities and Literature.

And by the look of it, they’ve been reading for a while because they have screenshots of designs I’d rather leave discreetly in the past… *Slight embarrassment*

Okay, back to the music. Undercover Soundtrack this way.

Posted by Roz Morris @Roz_Morris in Undercover Soundtrack on September 4, 2013

My guest this week began her debut novel with very little sense of where she was going.  All she had was a powerful scene and a yen to explore it. While she was experimenting, she happened on an audio seminar on understanding classical music. Suddenly she realised her character should be a virtuoso violinist – and the novel came alive. (Readers of My Memories of a Future Life will recognise a kindred spirit here. When I heard about her novel I had to recruit her.) She carried on collecting music to explore her character’s world and the result is a suspense novel with a rather unusual protagonist. She is Kathryn Guare and she’s on the Red Blog with her Undercover Soundtrack.