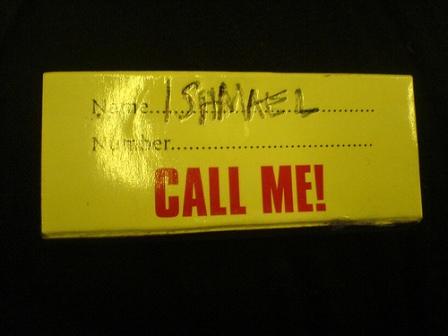 Daisy Hickman from SunnyRoomStudio has sent this question. ‘How soon, when writing in first person, does the story need to reveal the full name of the protagonist? And how do I weave it in? It always feels awkward.’

Slipping in your first-person narrator’s name is a small matter but often feels awkward. It’s logically unnecessary, since the narrator is talking to the reader directly. Of course, naming shouldn’t look like a piece of explanation for its own sake, the dreaded exposition. So writers can tie themselves in knots bringing in other characters who will intrude with a plausible reason to utter their name.

My father’s family name being Pirrip, and my Christian name Philip, my infant tongue could make of both names nothing longer or more explicit than Pip. So I called myself Pip, and came to be called Pip.

This is the opening paragraph of the entire novel. No messing there. But actually, Dickens has another reason for giving us his MC’s name so early. For much of the book Pip isn’t very likable, but every time we see the name Pip used later on, we are reminded of his child self.

At the other end of the naming spectrum is Daphne Du Maurier’s narrator in Rebecca. She doesn’t have a name at all until she marries Max and becomes Mrs de Winter. This is logical because until she marries she is a paid companion, with no status and nothing of her own and no one ever uses her name. It is also resonant– the girl has no identity, to herself or to the rest of society, until she becomes Mrs De Winter. And of course she feels like she is an impostor… I could go on.

Dickens had a good reason for giving us Pip’s name at the very start. And Du Maurier had a good one for not giving a name at all. So the reader isn’t going to feel lost or annoyed if the protagonist’s name isn’t revealed for quite some time.

Names in a first-person narrative are usually pretty peripheral anyway, unlike third person, where the name can be a profound symbol. You can get interested in a first-person character without knowing their name. We do it all the time in real life.

A terrible memory for names

How many times do you hear people say they don’t have a good memory for names? When we first meet people, we remember them more by what we connected or disagreed over. I have a friend who I first met when she was crazy for a handsome Italian guy she worked with. It was a few weeks before her name was ingrained in my brain, but I remembered every detail of her romantic plight effortlessly – and always will, even though they have married, had a daughter and divorced.

Your first connection with someone who talks to you as ‘I’ has little to do with a name. (Usually. Except for Pip. And Ishmael in Moby-Dick, who has chosen a symbolic name that tells us something about his character.)

Also, to an extent, you have a safety net. Where is the first place a reader looks once they’re enticed by your title or cover? The blurb. Most blurbs – or the Amazon version – slip in the protagonist’s name anyway. If the reader really starts to feel rudderless, they can look there. (This may seem like a cheat but it’s not a bad idea to write with an awareness of what is on the blurb. Lionel Shriver was spurred to find an extra twist in We Need To Talk About Kevin because she knew the flap copy would give away the novel’s main event. But I digress.)

Thank you, Daisy, for a great question, and Thunderchild7 on Flickr for the picture. Let’s share some examples: first-person introductions that work brilliantly – and ones that make you cringe

What’s in a name? Everything – guest post at SunnyRoomStudio

Posted by Roz Morris @Roz_Morris in Creating a character, Inspirations Scrapbook on November 7, 2010 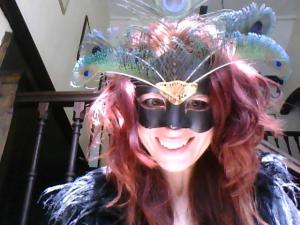 Today I’m guesting over at Daisy Hickman’s SunnyRoomStudio.
Daisy is a poet and the author of Where the Heart Resides:
Timeless Wisdom of the American Prairie and a tireless explorer
of what it means to be creative – as indeed you will know from the
searching comments she often leaves here. Daisy asked me to write
a piece about names in fiction, so here we go…

WHAT’S IN A NAME?  EVERYTHING

The three chambers of fluid, lacrimal caruncle, fornix conjunctiva, canal of Schlemm, choroid, ora serrata.  Where are these places?  Somewhere under the sea?  No, they’re right where you are.  They are parts of the human eye.

I sense an artistic sensibility in the world of ophthalmology, as though its members are preserving a sense of wonder about what these organs do for us…

And drop back here tomorrow for a more regular post.

How did you name your blog?

Posted by Roz Morris @Roz_Morris in Uncategorized on March 13, 2010

My blog’s a year old this weekend – come and join the party!

People often remark on the name Dirty White Candy (and for those who are curious, the explanation can be found somewhere on the right). This weekend marks a year since that evening – when my blog-savvy writer friend James Wallis gave me a spare room on his Dreamhost server and inaugurated me with a URL all of my own.

I owe him an enormous debt for pitching me into this hugely rewarding community. And I owe all of you heartfelt thanks for embracing my rants and musings as I try to better my craft, for responding so warmly and making me so welcome. I can’t believe that 12 months ago I knew none of you.

So as this is a birthday, I want to know about you. Whether you’re a regular commenter or you usually slip by in silence, I’d love it if this time you’d say hi.

If you have a writing blog, introduce it briefly. If you haven’t got a blog but you’re active on a forum, leave a URL. And, as this is a bit of a party, if you read through the comments here and find someone you haven’t encountered before, drop by and say hello.

Most importantly, I want to know this. How did you choose the name you use for your blog or forum presence? There are a lot of you I’ve been dying to ask for ages!