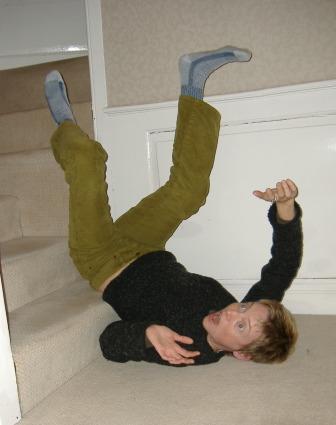 Hmmm... is there an upside to being upside down?

I’ve been chatting with Jonathan Moore about plots and he asked this very good question: Do you think the idea of worsening failures needs to be applied comprehensively for a plot to be compelling?  What happens if you give the MC a break now and then?

Most plots feature struggles – things go from bad to worse. The hero tries to do something (or stops something happening), and that kicks off a series of events that escalate. But Jonathan has identified an important point here.

Before the MC finally gets what they want (or doesn’t), you have to give them a break.

There are two reasons.

A plot can seem too predictable if all we see is failure after failure. The reader can get bored, not to mention punch-drunk. And for a story to have momentum, the reader needs the feeling that things are changing – a story of novel length needs to, as I said a few weeks ago, move the goalposts. So unless you specifically intend to bludgeon the reader with misfortune (which I find Thomas Hardy’s novels do), the MC needs some rewards before the end.

But variety isn’t the only reason to cut the MC some slack.

Often, giving the MC rewards can kick off an even better story. He wants something, he seems to get it. He gets more embroiled and that leads him into deeper do-do.

In Andrea Newman’s An Evil Streak,  a lonely single man has a creepy, obsessive relationship with his niece. When she was a child she was his angel. She bursts into puberty and starts dating, and he’s abandoned and jealous – the first blow. But then she falls in love and needs a place to sleep with her boyfriend. Kind, creepy uncle offers her his flat – a triumph as she is in his power like never before. Even better, he puts up a two-way mirror and watches. The rest of the story is a seesaw of successes that ensnare him more and scrapes that make the failures worse.

A perhaps less amoral example is The Unit by Ninni Holmqvist. The Unit features a futuristic world where childless single people are given at age 50 to medical science. They live in the lap of luxury while undergoing medical experiments, and will eventually make the ultimate sacrifice as organ donors. The story follows a woman who goes into such a clinic… and falls in love. Suddenly she has found what she has missed all her life – but is it too late? She is given hope, has those hopes dashed, is given more hope again… and the reader is right with her on the rollercoaster, heart leaping and stomach lurching.

This early success – where the character seems to get what they want, makes what unfolds so much more powerful. By involving us in the successes, the failures become more devastating.

Giving a character a break is used to very interesting effect in Thomas Harris’s Red Dragon, which became the first Hannibal Lecter film. For much of the novel we have watched the murderer Francis Dolarhide as an appalling monster. Then, unexpectedly, he strikes up a relationship of genuine tenderness with a blind girl. This goes to the very root of what he needs in life and lets us see a human side to him (while also making us afraid for the poor girlfriend as we’re sure she’s going to trigger his vicious instincts at any moment). Just as we wonder if this will redeem him, he sees her talk to a colleague and gets jealous – and then we know that as far as he is concerned, the universe has betrayed him and nothing will stop him. And that makes him even more formidable.

Rollercoasters need ups as well as downs. So when you’re making things worse for your characters, don’t have them fail all the time.  Explore what happens if you give them what they want – and snatch it away. Maybe do it several times. Thanks, Jonathan, for a provocative question as always!