Posts Tagged Not Quite Lost – Travels Without A Sense of Direction

Finding your personal magic – talking to @thecreativepenn about forgotten places, historic landscapes and Not Quite Lost

Posted by Roz Morris @Roz_Morris in Interviews, podcasts on January 28, 2021

This interview was such fun. You probably know Joanna Penn for her legendary Creative Penn podcast, but here she is in alternative guise – Books and Travel.

She invited me to chat about my memoir Not Quite Lost so we took off our teacher hats and nattered about the pleasures of purposeless wandering, the charm of seasides out of season, and the way a low-key place can be personally magical if we just bring our imagination.

And if you’re curious about what’s going on at my own writing desk, find my latest newsletter here and subscribe to future updates here.

Bill Bryson, Books and Travel, Britain, how to write a travel diary, Joanna Penn, Landmark Trust, Not Quite Lost, Not Quite Lost - Travels Without A Sense of Direction, Notes From A Small Island, travel writing, UK, UK travel

Posted by Roz Morris @Roz_Morris in Inspirations Scrapbook on February 21, 2020

If you enjoyed my interview with Krishan Coupland of The Liminal Residency, you might like this post by me on their blog. It was inspired by a weird weather effect after a long, long drive in the fog, and perhaps a bit of headlight hypnosis. You can find a longer version in my travel diary Not Quite Lost: Travels Without A Sense of Direction.

Anyway, do hop over … and if you’ve had a similar experience, let’s discuss it in the comments!

PS And here’s my latest creative news, hallucinatory and not, in my newsletter

The writer’s persona in the narrative, MFA courses and Englishness – interview at Rain Taxi

Posted by Roz Morris @Roz_Morris in Interviews on January 27, 2018

How much should a writer’s personality show in a book? Some authors keep themselves out of the narrative voice, even in a personal book such as a memoir. Others colour every page with their sensibilities and personality, even if they’re writing fiction. This is just one of the questions I’m discussing today in the literary magazine Rain Taxi.

You might recognise my interviewer – Garry Craig Powell, who has been a guest on The Undercover Soundtrack (he put Phil Collins songs to unforgettable and cheeky use). Garry has also taught creative writing at university level, so that’s another discussion we have – are these courses useful, necessary, a hindrance, something else? What about journalism – when is that a good start for a fiction author?

And then there’s Englishness. What is that? Well, it could be a quality of restraint – when saying less means more. It might also be a sense of Elysian yearning for an emblematically romantic world, including the tradition of stories about remarkable houses. We’re trying to thrash it out. Do come over, and bring tea.

Posted by Roz Morris @Roz_Morris in Interviews on January 6, 2018

I ran into Victoria Dougherty a while ago in a Facebook group and recognised a kindred spirit. Not just because she writes fiction, personal essays and memoir, but because of the way she is inspired by family, place and relationships. (Take a look at this piece, Growing Old(er) Together, and tell me you don’t want to know her too.) She took a shine to Not Quite Lost and invited me to her blog, Cold, for a chat about the culture of a long marriage, the delight of exploring places that no-one else would bother with, the micro-cultures of quiet English towns and whether I should get out more. She raided my photo album too, as you can see. Do come over.

Southerners going north, the most romantic ruin and the town you can’t leave – interview at Chris Hill’s blog

Posted by Roz Morris @Roz_Morris in Interviews on November 21, 2017

Chris Hill is a name you might recognise here. A while ago he appeared on The Undercover Soundtrack with his prizewinning novel about young men taking lessons in love, The Pick-Up Artist. Today he’s picked up a copy of Not Quite Lost and asked a few questions.

Chris is originally from the north of England, and enjoys teasing southerners who never venture to those wuthering regions. Especially if, tsk tsk, they have the temerity to write a travel book. (In that case, he got a surprise – I’m from the north.) Chris also knows that travel isn’t all about postcard-perfect places and is not afraid to wield the term ‘crappy’. Expect a blunt conversation with a dash of Laurie Lee and The Prisoner. Come over if you dare.

Posted by Roz Morris @Roz_Morris in Interviews on November 2, 2017

Why is reading such a pleasure? With all the other things we could do to entertain ourselves, why does a good book still grip our imaginations and our hearts? What does it offer that nothing else can beat?

Today I’m puzzling this out on the Literary Sofa, which is the blog of Isabel Costello. Her name might sound familiar because she was a recent guest on The Undercover Soundtrack. Today she’s invited me to her cosily-named online home. Bring tea and cushions.

‘Writers are introverts who want to tell you a story but not make eye contact’: discuss. Interview at Jane Davis

Posted by Roz Morris @Roz_Morris in Interviews on October 26, 2017

The above statement is from John Green, author of The Fault In Our Stars. It’s an interesting jump-off point to discuss some of the paradoxes of the writing temperament – quiet people who are expressive; private people who want to draw you into a deep experience.

Today I’m at Jane Davis’s Virtual Book Club blog, discussing this and a few other matters. Although we also cover the origin story of Not Quite Lost, which many of you already know, we soon get on to plenty of other talk. And Jane is celebrating a big birthday this week, so if you’re quick, you can take advantage of a special offer she’s running on her own books. Step this way. Don’t be shy.

A change is as good as a rest – the distraction project. Guest post at The Quivering Pen

I am so chuffed to be on The Quivering Pen books blog, the online hideout of Iraq War novelist David Abrams. I’ve been following it for years. I have shamelessly headhunted many of its guests for The Undercover Soundtrack (and yes, you’ll see David’s Soundtrack here soon).

David has a series called My First Time, where authors confess a virgin experience of writing and publishing life. I’m there today talking about distraction projects – creative stuff you do when you really should be doing something else. You probably all know my travel diary is one of those, but I’ve actually been far more distractible than that. In my time I’ve made recipe books and a music soundtrack for a series of illustrated books. All of which taught me surprising things when I returned to my proper work.

Anyway, do pop over. Especially if you really should be doing something more important.

Not Quite Lost is launched! And making-of interview with Henry Hyde

Posted by Roz Morris @Roz_Morris in How to write a book, Interviews, podcasts, self-publishing, The writing business, Writer basics 101 on October 2, 2017 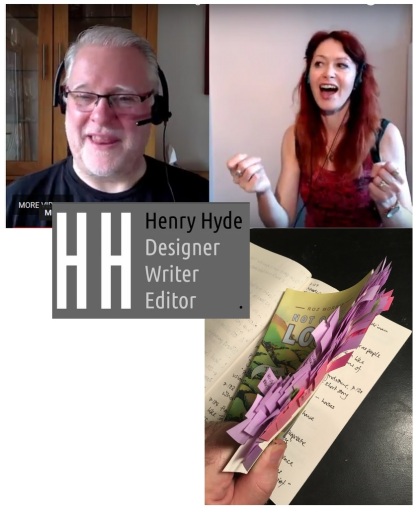 Oh my heavens, it’s publication day. Not Quite Lost: Travels Without A Sense of Direction is no longer a tease in a tweet or a blogpost. It’s a real thing. A paperback book. A hunk of Kindle estate, or Kobo, or whatever other ebook format floats your boat. (Though there are no boats in the travels … plenty of buses, however.)

And my writer/designer friend Henry Hyde has invited me to his blog to chat about it. We cover technical stuff like developing a writing style, influences like Bill Bryson and Gavin Maxwell, and  some of the main thematic stops such as the romance of old houses, impostor syndrome and 1970s Doctor Who. Do hop aboard.  Oh, and you can find the book here.

1970s Doctor Who, Bill Bryson, England, Gavin Maxwell, Great Britain, guest post, Henry Hyde, how to write a book, how to write a travel diary, impostor syndrome, interview, Not Quite Lost - Travels Without A Sense of Direction, Notes From A Small Island, travel writing, video

Posted by Roz Morris @Roz_Morris in How to write a book, Interviews on September 29, 2017

Ruinlust. It’s a word that means ‘the unseemly feeling of attraction to abandoned places and crumbling buildings’. At least, that’s what Robert Macfarlane said when I had a chat with him about it on Twitter. And if anyone would know, he would. (Here’s why.)

I don’t understand the ‘unseemly’ part, though I suspect Husband Dave might. He is not as ruinlustful as I am. (‘Must we trek all that way to look at that half-derelict tower, Roz?’)

Anyway, how is this connected with ideas and where they come from?

When book blogger Davida Chazan (The Chocolate Lady) reviewed Not Quite Lost, she pounced on a note in the afterword where I mentioned the settings that had appeared in my fiction. A magnificent decaying mansion in Devon. The remains of drowned towns in Suffolk. They were the seeds of Lifeform Three. Ruinlust, through and through.

But settings can give you more than just a sense of place. As I edited, I had a surprise. I wasn’t just dusting off old anecdotes, I was digging the archeology of my own themes and curiosities. Memory, identity. Buried histories. (More about that here.)

Davida asked me to come to her blog and write a proper post about it. It seems that even if you go back into your own past, it’s still a new journey. Out of sight, not out of mind. Do come over.