‘An earworm of the heart’ – The Undercover Soundtrack, Katharine Grant

Posted by Roz Morris @Roz_Morris in Undercover Soundtrack on November 11, 2015

My guest this week says she would like to be able to play the piano to concert standard, but since she can’t, she uses words as her instrument of enthrallment. Pianos are central to the plot of her latest novel, a historical romance in which four nouveau riche fathers attempt to marry off their daughters by displaying their talents in a music recital. Mayhem ensues, con brio. She says her musical ear guides her writing; Bach helps her to listen to the cadence of words and Purcell reminds her, in the most emotional way, that writing is all about remembering. (Are you guessing that Dido’s Lament might be coming up?) She is Royal Literary Fund Fellow Katharine Grant and she’s on the Red Blog with her Undercover Soundtrack.

‘Stay close to sounds that make you glad to be alive’ – The Undercover Soundtrack, Chris Cander

Posted by Roz Morris @Roz_Morris in Undercover Soundtrack on June 9, 2015

My guest this week is crossing her fingers as her agent sends out her third novel. It’s called The Weight of A Piano, so you can probably see why she fits very well here. All of her fiction is heavily shaped by music behind the scenes, from a song about a widowed woman that presented her with a grieving character, to a Miles Davis piece that captured the heart and peculiar solitude of a man who has just lost his secret love. And then, of course, there’s the piano. She is Chris Cander and she’s on the Red Blog with her Undercover Soundtrack.

Posted by Roz Morris @Roz_Morris in Undercover Soundtrack on June 25, 2014

Johannes Brahms reportedly referred to his third intermezzo for Opus 117 as ‘the lullaby of all my grief’. This week’s guest was studying music in summer school when she first encountered it, and was overwhelmed by its sadness. Life events interrupted her dreams of becoming a musician, but years later, when she was writing a novel about a ballet dancer, her research led her to the Brahms. She remembered the imaginative journey she had taken when she used to play the piece, and now it guided her creation of the main character and her story. She is Laura K Cowan and she’s on the Red Blog with her Undercover Soundtrack.

Posted by Roz Morris @Roz_Morris in Interviews on February 14, 2012 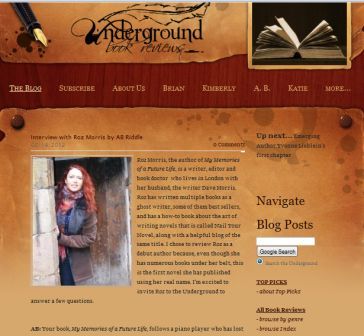 How did I develop the underwater world of the Soothesayers for My Memories of a Future Life? What experience did I draw on to create the musician narrator Carol? Did I start my blog to plug my writing book (a timely question considering this week’s post)? What’s this Life Form 3 novel I mention from time to time?

My Memories of a Future Life was reviewed yesterday at Underground Book Reviews, and today they’re in interview mode, digging for answers… including how do I prove I ghostwrote those bestsellers? And will my career as a movie extra ever amount to anything? Come and delve…

If you have tackled any of the questions I was asked about – including creating worlds or understanding a character’s passion, share in the comments!

fantasy worlds, ghostwriting, having ideas, how to create a fantasy world, how to write a novel, interview, interviews, literary fiction, music, My Memories of a Future Life, Nail Your Novel: Why Writers Abandon Books and How You Can Draft, Fix and Finish With Confidence, novels, piano, publishing, reincarnation, Roz Morris, self-publishing, writing, writing a novel - Nail Your Novel, writing life