Posted by Roz Morris @Roz_Morris in Undercover Soundtrack on August 13, 2014

My guest this week used the Moonlight Sonata to guide her through her latest novel. A central character was a pianist, and the story explores the emotions and reckonings that emerge in the wake of his death. She says the Moonlight pulled her in surprising directions, peeling off the layers of a family’s bonds and rifts, and illuminating a complex web of relationships and resentments. The piece became so significant that when she launched the novel, she persuaded her husband to give a performance of the first movement. She is award-winning author Lindsay Stanberry-Flynn and she’s on the Red Blog with her Undercover Soundtrack.

Posted by Roz Morris @Roz_Morris in Undercover Soundtrack on June 25, 2014

Johannes Brahms reportedly referred to his third intermezzo for Opus 117 as ‘the lullaby of all my grief’. This week’s guest was studying music in summer school when she first encountered it, and was overwhelmed by its sadness. Life events interrupted her dreams of becoming a musician, but years later, when she was writing a novel about a ballet dancer, her research led her to the Brahms. She remembered the imaginative journey she had taken when she used to play the piece, and now it guided her creation of the main character and her story. She is Laura K Cowan and she’s on the Red Blog with her Undercover Soundtrack.

‘The mystery of enchanted forests and the thrumming chill of icy passes’ – The Undercover Soundtrack, Melissa McPhail

Posted by Roz Morris @Roz_Morris in The writing business, Undercover Soundtrack on January 23, 2013

My guest this week began writing at roughly the same time as she started piano lessons. She says music and writing have always been natural pursuits for her, ways to help her grapple with a fundamental need to express the inexpressible. When she needed an aural companion for her epic fantasy series she found it in Bill Whelan’s rousing Riverdance. She is Melissa McPhail and she’s on the Red Blog with her Undercover Soundtrack.

Put through my paces by Guys Can Read: literary writing, storytelling and the brave new world of indie books

Posted by Roz Morris @Roz_Morris in My Memories of a Future Life, podcasts, self-publishing, The writing business on November 8, 2011

Today I’m back at Guys Can Read, the weekly podcast books discussion hosted by Luke Navarro and Kevin McGill. Luke and Kevin adore fiction, period. They review everything from Jonathan Franzen to Star Wars novels, with equal expectations of great storytelling, strong characterisation and robust themes. They’re not afraid to pick apart what doesn’t work, regardless of how hallowed it might be, to venture into genres outside their usual tastes (which are pretty wide anyway) and to celebrate a darn good book even if it’s in a genre that’s normally sneered at. Kevin’s also just released his own rip-roaring fantasy adventure, Nikolas and Company: A Creature Most Foul, now available on Amazon.

I’ve been on their show a few times and was thrilled they wanted me along now that I’ve released My Memories of a Future Life. We started by talking about the novel but soon ventured into wider discussion. We nattered about aspects of literary writing that can get in the way of the story and characters. We talked about indie publishing – as a choice to connect more closely with readers, whether it’s risky for writers with an established career, and how readers and writers will in future be setting the publishing agenda just as much as commercial publishers.  Oh, and whether I get away with opening my novel with a whinge scene. Come on over.

Posted by Roz Morris @Roz_Morris in My Memories of a Future Life, The writing business, Writer basics 101 on September 27, 2011

When I ghostwrite, it’s a collaboration. The editor, the ‘author’ and various other parties will be involved with it from birth. Together we hammer out the plot. I go to them first with my research questions. We chat about how it’s going. Of course the majority of the work is mine, but by the time I deliver the manuscript it’s as though it’s been written in public.

Writing my own novels is not like that at all.
The first time an agent talked to me about My Memories of a Future Life, it was a surreal experience. I met her in a cafe in Covent Garden, on a freezing cold February evening. We sat outside in the penumbra of a gas heater. As people scurried past on their ordinary way home, a person I had never met before was talking to me, in great detail, about regression to the future. The tangled dynamic between four people. Music and its ghostly role in the book’s world. It wasn’t like any other book I’d written, it was more like a long and elaborate secret I’d been keeping. It was so bizarre I was struck monosyllabic. I still haven’t quite got used to it.
I’m over at Women Writers today, talking about the curious and special relationship writers and readers have with novels. Do join me.

‘Spellbinding… I was hooked…’ Rachmaninov and Ruin out now

Posted by Roz Morris @Roz_Morris in interactivity, Kindle, My Memories of a Future Life, self-publishing on September 4, 2011

My Memories of a Future Life, Episode 2: Rachmaninov and Ruin, is in the Kindle store.

Everyone who’s reading it is telling me on emails, Facebook, Twitter and in reviews where they think the story is going, what crumbs they’re following and what their hopes for it are.

This is so interesting. The size of print novels was largely dictated by the economics of production and distribution, which meant it didn’t pay to release fiction that was too long, or too short, or even serialised. But the Kindle has none of these constraints, and it can connect through social networks too. Through Kindle, people can gather around campfires and enjoy stories as a communal experience and it will only get better. It’s going to be so exciting to see what new storytelling forms we get in the next few years.

Anyway, around our own little campfire, Part The Second has arrived. For .co.uk click here and .com find it here. To listen to a free audio trailer of episode 1 (35 minutes), go here.

Amazon, facebook, fiction, interactive stories, Kindle, My Memories of a Future Life, Nail Your Novel: Why Writers Abandon Books and How You Can Draft, Fix and Finish With Confidence, pianos, publishing, Rachmaninov and Ruin, Roz Morris, social media, twitter

Music as a form of spiritual possession… and other matters

Posted by Roz Morris @Roz_Morris in Kindle, My Memories of a Future Life on August 15, 2011 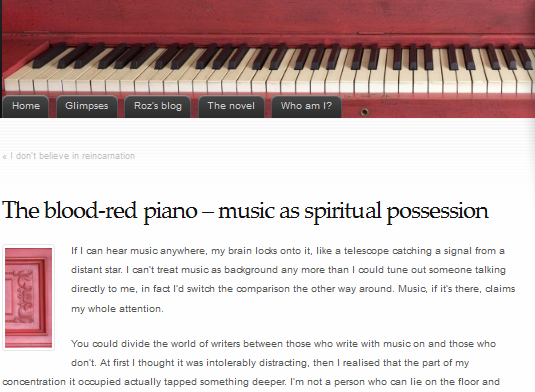 Over at the red home of My Memories of a Future Life I’ve been a bit more active than I anticipated. I’ve been writing material to put up nearer to my novel’s release, but  people have already been asking me questions – which can only be answered in posts. In case you’re curious, here are the first three posts:

I don’t believe in reincarnation

fiction, Kindle, My Memories of a Future Life, Nail Your Novel: Why Writers Abandon Books and How You Can Draft, Fix and Finish With Confidence, pianos, publishing, reincarnation, Roz Morris, Roz's fiction, Theme, writing a novel - Nail Your Novel, writing life