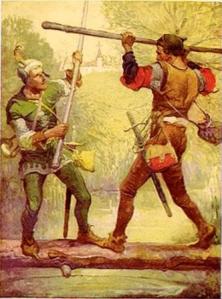 When Robin Hood met Little John, they had a fight. There’s a good reason for us to want to know more. But how do you write the first meeting in a relationship that is much slower off the blocks?

If your book is about a relationship (and most are in some way), you often like to explain how it started. But if the characters’ first encounter was average and unremarkable, how do you write it? The kind where there are no bells and whistles, fights or thunderbolts – where the two people don’t take any special notice of each other?

In real life, many of our friendships may have started with encounters that are unmemorable. I was reading a friend’s novel the other day and she had just this problem. A meeting that isn’t notable in any way, except for being the first time two characters meet. There was some dull chit-chat and it was dead on the page.

So how do you make it interesting? Here are two possibilities.

Maybe you don’t have to make a scene of it. You could do a montage of snapshots to build up a sense of these people being in each other’s lives. ‘They met often at the same parties; coinciding at the fridge for another beer, squashing down the crowded corridor at the same time to get their coats. One rainy evening in November he found her browsing the film books at Foyles.’ A few little encounters, compressed artfully, can add up to a growing connection – while leaving out the dull bits.

Many of us learn our storytelling, consciously or unconsciously, from films – which generally show everything blow by blow. But in prose, the narrator is a versatile lens that can telescope out or zoom in with far more agility. You can describe time in the way it feels internally, capturing how the experience is more accurately than if it was shown literally: ‘There she was in the corner, as she usually was at this time of year. I wondered whether to talk to her, then I thought, no I’ll do it next year.’

Of course, summarizing a scene can be distancing – unless there’s a good reason to. Here, though, it makes the material far more engaging.

Or don’t show the first meeting at all. Yes, if it’s that unremarkable, perhaps you should start with the third meeting: ‘It’s you. I can never remember your name.’ And there you have the beginnings of a fun conversation.

If nothing particularly memorable happens when your characters first meet, then don’t show it. Break out of the step-by-step unfolding and get creative with what you show and the way you show it.

Have you had to solve the ‘unremarkable first meeting’ scenario?