Can you hear me calling? Social media sites for authors – Ep 38 FREE podcast for writers

In some ways, this episode might show its age. We recorded it five years ago, with our friend Adam Waters who’s worked for TV, news organisations, social media organisations and various digital setups. We saw a piece he wrote about how authors can effectively use social media… which mentioned platforms and networks we’d never heard of. So we stuffed him in a sack and brought him to our microphone.

We begin with Toyah. Because: hair. Also because she’s singing about putting a call out into the universe, looking for people who can hear. That’s what we’re all doing, and that hasn’t changed. And while some of the networks and platforms Adam mentions might not now be so prominent, others are still viable and vibrant and it’s interesting to hear the different ways they operate. Some are better for text, some for pictures, some for building relationships with select and personalised groups, some are better just for ‘putting yourself out there’, broadcasting to the world. 2020’s versions might have different names, but the way people interact with them won’t have changed.

My co-host is independent bookseller Peter Snell. Stream from the widget below or go to our Mixcloud page and binge the whole lot.

PS If you’d like more concentrated writing advice, try my Nail Your Novel books. If you’re curious about my own creative writing, find novels here and my travel memoir here. If you’d like to support bricks-and-mortar bookstores (US only at present) use Bookshop.org. And if you’re curious about what’s going on at my own writing desk, find my latest newsletter here and subscribe to future updates here.

Posted by Roz Morris @Roz_Morris in blogging, Formatting for print on April 22, 2020

How can authors use blogging and social media effectively? How should they get started? How much time does it take to build an audience? Will you like it?!

That’s what we’re talking about this episode.

A caveat! These shows are a few years old now. We recorded this episode in 2015. Some of the platforms might not be so fashionable or useful for authors now. On the other hand, Facebook and Twitter are still going strong and are still the main places I meet readers and writers I want to know better. And blogs? We must have been through several periods where everyone declared blogging was dead – but you are here and I am here and this is a blog and none of it is dead at all.

Moreover, social media have been the entire mechanism by which I built a career as a writer under my own name, without a publisher (in case you don’t know, I have a big secret career writing books under other names). The finer points might have changed – and might well change again. But the methods and principles will still be the same. So I’m hoping this show will still be a useful primer.

Asking the questions is independent bookseller Peter Snell. Answering them is me!

Stream from the widget below or go to our Mixcloud page and binge the whole lot.

PS If you’d like more concentrated writing advice, try my Nail Your Novel books. If you’re curious about my own creative writing, find novels here and my travel memoir here. And if you’re curious about what’s going on at my own writing desk, find my latest newsletter here and subscribe to future updates here.

Social media: a message in a bottle 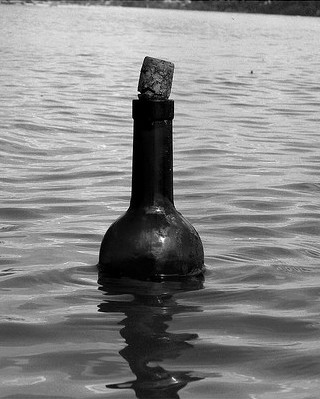 You’ve seen this week’s Undercover Soundtrack? I want to tell you how I met its author, Dave Newell.

He emailed me out of the blue because he’d run across a comment of mine on a blog written by Nathan Bransford. It was a post about the difficulty of self-publishing literary fiction, and Dave – whose work is indelibly literary – was asking if I knew where those readers hung out on line.

The funny thing is, I left that comment more than two years ago. When I look at it I was talking about episode 2 of My Memories of a Future Life, which had just gone live. Oh, nervous days – I probably wrote it in the hope that it would lead ME to a secret vast land of literary readers. (It didn’t; I should probably work on that.) Probably no one else took much notice, and so it stayed there, falling under new comments and posts, sedimenting into the substrata of the ever-renewing, multiplying internet. Then two years on, Dave Newell typed a few words into Google and it led him there.

We struck up a conversation. I don’t know that I was much help with his problem, though we had fun talking. But I did offer him a guest spot on The Undercover Soundtrack, which I’m very glad he took. Especially as I then had an email from a fan of the series who told me how excited he was to discover this author. (I’m sure there were other converts too, only they didn’t email me to share.)

So does this story have a bigger payoff? Does it end with a hardback deal, an Amazon landslide, a red carpet? Actually no. But it does end with a special reader, who was charmed by a post by someone he’d never heard of. As Dave Newell leaped on a random comment by someone he’d never heard of, which had been made by someone visiting a blog hoping to find likeminded folk. A chain of strangers finding they have kindred interests; that’s rather nice.

Author platforms are also on my mind because this week I was a guest speaker at an online author marketing conference called Get Read. A message we heard constantly was that platforming is a long game, and we might feel like we’re getting nowhere, giving so much of ourselves and wondering if anyone notices. This episode reminds me to keep the faith.

It also reminds me that platforming is full of contradictions. That for all its widewidewide reach, it operates at a micro scale, person to person. That our blurts on websites and social media seem trivial but are actually eternal, and might be summoned to the top of a search by the right Google spell (just like bad party photos). The take-home point of my GetRead session was this: be yourself and stay gregarious. Anything you write might find a new reader, an ally, or a friend.

Thanks for the pic SergioDJT