Posted by Roz Morris @Roz_Morris in How to write a book, Inspirations Scrapbook on December 1, 2013 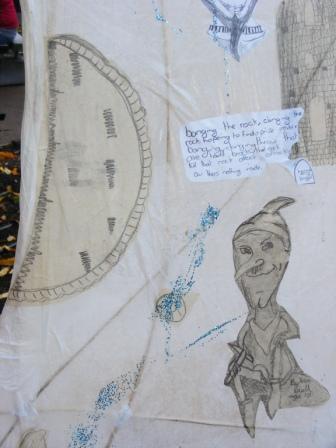 I have a friend who is a graphic designer, and he’s as adept with words as he is with images. Recently he said to me: ‘I don’t know how you get a book finished. I have all these ideas but my imagination’s like a rope that frays into too many ends.’

(You see what I mean? He should definitely write.)

‘Yes, but when I look at them they’re dry and dull.’

Aha, my friend. You’re making the wrong kind of notes.

The wrong kind of notes?

Years ago, I used to keep a dream diary. I found it a few months ago and expected the entries would be indulgent nonsense, without the meaning, resonance or early-morning mind that makes a dream a good experience. But no; in those fragments the experience came back, just as odd and wondrous. Now I’m not going to bore (or scare) you by quoting one here, but what I will tell you is why they still worked.

They were written with a dream-head. They captured experience as well as logic and explanations.

What’s this got to do with making notes?

In Nail Your Novel (original flavour), I wrote that you should keep your earliest draft. If a scene has lost its sparkle, look back at the first time you had a go at writing it. Yes it will be shambling and embarrassing, blurted onto the page. But it will also contain emotional language, straight from the things you were feeling as you discovered it. This is the freshness and immediacy that can disappear with editing, or when you try to refine, get formal or explain.

It’s also the quality that can disappear when we write notes after a brainwave.

So when I write down an idea, I make sure I include this raw response. I write them as a stream of consciousness, like a dream. Because that’s what comes to me first: the certainty of what I want the reader to feel. If possible, I’ll also keep a talisman that will allow me to replay it again, and indeed might have been the initial inspiration – a scene in a book or a film, or a piece of music. (We know all about that here, with our Undercover Soundtracks.) There will be practical elements too, so it’s not complete gobbledygook – eg ‘man sees woman in coat that’s just like his wife’s, assumes it’s her and follows her’, but those look dry when you read them in isolation.

Stories are emotional. You want to make sure your notes help you remember the impact that made you so excited, as well as the hows and whyfores.

Do you find your ideas have dried up and died when you read your notes? Do you have any tips for keeping it? Let’s discuss!

Psst… My second novel Lifeform Three is coming very soon. It’s a fable in the tradition of Ray Bradbury. If you’d like to hear as soon as it’s released, sign up for my newsletter. If not, as you were 🙂

authors, being inspired, deepen your story, dream diaries, dreams, fiction, having ideas, how to be inspired, how to beat writer's block, How to make notes, how to remember your brilliant ideas, how to write a book, how to write a dream diary, how to write a novel, inspiration, music for writing, My Memories of a Future Life, notebooks, novels, polishing, publishing, Rewriting, Roz Morris, stay inspired, story ideas, writer's block, writers' notebooks, writers' notes, writing, writing a novel - Nail Your Novel, writing a story, Writing Characters Who'll Keep Readers Captivated: Nail Your Novel, writing life, Writing Plots With Drama, Depth & Heart