Posted by Roz Morris @Roz_Morris in How to write a book, Life Form 3, self-publishing, The writing business on February 24, 2013 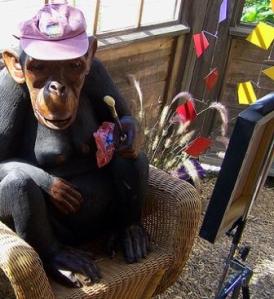 Your novel’s cover is make or break, especially if you’re an indie. Whether you do your own art or use a designer, you have to know your book’s market and what will grab the right readers.

I tweeted two posts this week where indie authors wrote about working with cover designers – one by Andrew Kaufman at Crime Fiction Collective and the other by Terry Odell at Blood-Red Pencil.

They talk about an exciting two-way process where they discuss images and typographical treatments. But you can’t direct a designer unless you know what your cover should say. And that’s my problem with Life Form Three, which I’ve decided I’ll publish later this year. Perhaps it’s yours too, especially if you have a novel you’re told is too original and doesn’t fit a genre. This is how I’ve solved it.

I decided to do market research. And it’s turned out to be incredibly helpful.

I picked an emblematic scene from the book and roughed out a cover to illustrate it. I sent it to friends, who I figured might like the book but in different ways. I included a few hyper-critical writers too, because I knew they would give me the truth.

I also found I got more honest critical comment when I asked friends to show the cover to their spouses and report back. If the spouse didn’t have to worry about hurting my feelings, they were far more brutal.

The questions I asked

I didn’t ask: ‘do you like this cover’. A ‘yes’ or ‘no’ doesn’t tell you anything. Instead my questions were: What is this book about? What does it say to you? (They’ll tell you anyway whether they like it.)

Do they already know anything about Life Form Three? No – and that’s the point. They are interpreters telling me what I’ve just said in a language I don’t yet speak. I thanked them for their feedback and explained that I wasn’t going to tell them whether their responses were on the right track or not in case I needed to use them again.

I repeated the experiment with another rough cover in a very different style, and gathered another bunch of useful responses. I added more guinea pigs who hadn’t seen the previous version.

What did it cost?

Nothing, except time researching images (which was considerable – so start well in advance). The pictures for the first cover were roughs from photo libraries, which they’ll let you download free to make dummy designs. The second cover was a detail from a painting I knew I could license. I can’t show you either of them here because I don’t have the reproduction rights. (Also, I don’t want you to get the wrong idea – my jurors have been sworn to secrecy!)

Totally. I was very surprised by some of the responses – and that showed how much I needed their feedback. And this brings me to another point. Don’t do a test if the results won’t influence what you do next. With both trial covers, I thought I was onto a good concept. When I tested them, I discovered flaws I couldn’t have thought of.

But after these two exercises, I have clarity. Even though neither cover was right, I know what the real thing should say and I can brief a designer. (And my guinea pigs are still in suspense…)

What kind of brief do you need to provide? A designer won’t have time to read your book. Send a synopsis that captures not just the events but gives a flavour of the storytelling style. Also list the target audience including age group, imagery and themes that might be of special significance or scenes that could carry the spirit of the whole work. Also explain why you chose the title, as the art should enhance it or create intriguing tension. And let the designer know if you want to leave room for blurb quotes and loglines.

I’m not going to publish Life Form Three until at least autumn, but I need the cover  in advance because that will set the tone for everything else. The blurb and any publicity materials will be created to make sense of it. So it’s essential that the book’s outside is faithful to the inside.

Footnote: how the other half lives

Funnily enough, as I’ve been moving mountains for the right cover, a traditionally published friend is having a very different experience. I know indies are probably past the stage where we have to stress that our production processes are up to professional standards, but this left me reeling.

Out of the blue my author friend was sent a cover by the art director. He hadn’t been consulted about it. It would be worth getting his input too, as he’s been a bestselling children’s author for more than a decade and knows what covers have sold well to his readership. He tells me that when he signed the contract he emailed the art director and offered to send briefing notes, but was curtly told: ‘We don’t need your notes. We know what we’re doing’.

So did they? No. The cover they designed was catastrophically inappropriate. They didn’t ask about the the age group, so they made it look too juvenile. While the book’s  competitors have slick images that look like computer games, this cover featured big typography (ie it was cheaper than proper art) and thumbnail graphics. Even the font gave the wrong messages – it suggested the setting was the wild west, whereas the book is set in ancient Persia. Now the author is locked in a dispiriting argument with the publisher about a cover he knows will be a disaster.

You know what? I’m glad I have control of my cover.

How have you decided what to put on the cover of your novel? How have you made sure it sends the right signals? Have you changed a cover so that it could find its true audience?

Thanks for the pic Danorth1

(I haven’t finished with covers yet. I may need jurors for Life Form Three Version 3. If you’d like to be one of the secret clan, email me or sign up to my newsletter)