Posts Tagged how to run a writing community

How to – and how not to – run an online writing community. And publishing post Covid. Interview with literary agent Peter Cox of @Litopia @agentPete

Posted by Roz Morris @Roz_Morris in How to write a book, The writing business on September 13, 2020 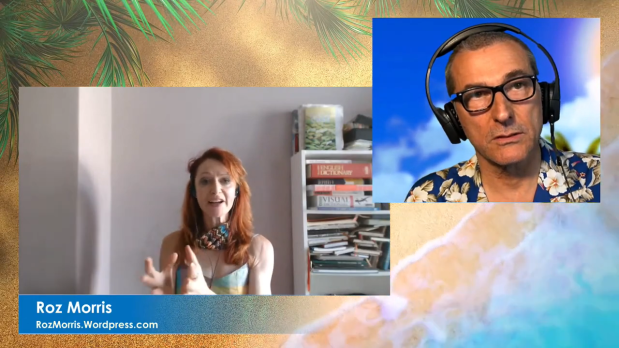 You’ve seen the posts here about Peter Cox’s writing community Litopia – the home of Pop-Up Submissions, where manuscripts are critiqued live on air by writers, readers and a chat room. Sometimes the guest critic is me! I’ve always been impressed with the show. For a start, it looks amazingly slick. But underneath that is a genuine love of books and reading, who value writing that is done well.

On one of our pre-show chats Peter remarked: ‘someone should write a piece about literary communities. I’ve made every mistake in the book.’

Someone definitely should, I said.

So here we are. We also talk about the publishing world post-Covid: what might publishers be looking for? What do readers want? Can that question even be answered yet? 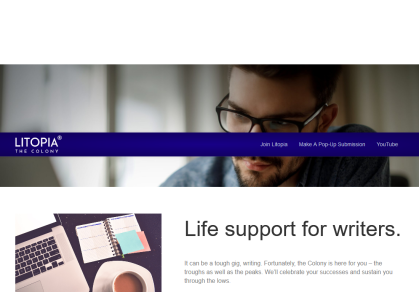 Roz Tell me about Litopia. What is it, how long has it been running, how big is it now? What made you set it up?

Peter Litopia has been going for decades.  It’s by far the oldest writers’ community on the net.  We’re probably due for our silver anniversary round about now.

Originally, I was an early member of one of the oldest virtual communities online, the WELL.  This was an odd collection of folk, many of them connected to The Whole Earth Catalog, who thought it would be fun to set up an intentional community in cyberspace.  People such as Stewart Brand, Kevin Kelly, and Howard Rheingold.

Roz I’ve never even heard of that. I just googled it and found it stood for Whole Earth ‘Lectronic Link. I love that. It’s so retro-futurist. (Retro-futurism, You heard it here first.)

Peter Looking back, the WELL was always quite cliquey.  If you didn’t happen to be in with the cool crowd, who smoked a prodigious amount of dope by the way, then you weren’t really significant in the community.

It was a wildly optimistic time.  People naively believed that computers would democratize the world.  “Access to tools” was the mantra.  “The Future” was an exciting place – and most of us believed we were already living there.  The horrors of venture capitalism, Facebook and creeping state surveillance and control weren’t even on the radar.

From my experience on the WELL, I thought it would be exciting to establish a community just for writers.  Most writers already had computers.  And I felt there was an unmet need for social contact that legacy organisations such as the Society of Authors could not fulfil.

Roz I’ve mainly come across Litopia in the Pop-Up Submissions show. For those who don’t know the format, it’s a Dragons’ Den for writers. Five manuscripts are critiqued on air by you, two guests and the observers in the chat room. It’s a brave thing to do live online. We’ve all encountered the ugly sides of social media, but you’ve managed to create a civilised and constructive tone. At the same time, the show doesn’t pull its punches. Everyone’s there because they want to see honest criticism and they want to learn. How have you achieved this?

Peter Thank you, Roz.  That’s the tone we want to strike, and I think we mostly do.  Obviously, our choice of guests such as you is important 😊  But seriously, I like writers, always have done.  They are unusual people, not always well-suited to the mundane world.

Roz Totally. Writers – and other creatives – look into cracks that others don’t even notice. They ask questions that can’t easily be answered and aren’t necessarily of practical use, but nevertheless seem to make life a little more worthwhile. We often think we’re on our own, too. At school, I was always interested in the wrong things or the unusual angles. I didn’t realise that this was characteristic of a particular profession. I thought I just didn’t fit. (I’ve written about that here – I write because I’m totally unsuited to anything else.)

Peter Writers definitely see things a bit differently, and thank heavens for that.  They challenge and expand our own definition of what being human means.  A world without writers would not be worth living in.  So they need our support and encouragement, but also, our honesty.  When you write, you necessarily lose much of your objectivity, and that why (most!) writers need honest feedback during the writing process.

Roz Yes – and I want to briefly talk about that. We lose our objectivity because we have to commit so much to the work. We have to believe in it, spend the time to get it right, often making themselves vulnerable. I never forget this when I’m giving critical feedback to writers. The text they give me represents a huge investment of faith. (I’ve talked about this before: Why your editor admires you.)

Peter I know.  I think it’s a great privilege to work with a writer at that kind of level.  What we can do on Pop-Up Submissions is to give some objective feedback, but not in a destructive way.

Roz What mistakes did you make with Litopia in the early days? And even in the later ones?

Peter A great many!  A few years ago, HarperCollins set up something called Authonomy, which didn’t last long, and I believe cost them a few million.  It really is not nearly as easy to set up an online community as it might appear.

The first I mistake made was not charging anything for it.  I carried all the costs.  This was a huge mistake, because people expected me to provide more and more – and got angry if they didn’t get what they were expecting.  I think people are beginning to understand now that the net has the same economics as any other part of life.  If Facebook is free to you the user, that’s only because they are ruthlessly mining your data and selling it at a vast profit to shadowy third parties, including people like Cambridge Analytica and the security services.  Are you really comfortable with that?  Personally, I’d prefer to pay a modest amount for membership of a site like Litopia, and forgo the creepy surveillance!

Roz So Litopia has evolved into its own beast… How does that compare with your original idea? Would that original intention have been possible, do you think?

Peter We evolve by reaction.  Everyone has access to me and can suggest whatever they want.  Some things are not going to be technically possible, but many are.  We’re quick to seize the technical opportunity.  Some technology is surprisingly cheap and under-exploited, that area is always of interest.

Roz I have to mention the technology. This show is seriously sleek. Many video-podcasts are essentially like watching a Skype call – a screen split between two or three speakers. Litopia is like a high-budget TV quiz show. All the presenters appear to be in a studio, behind a massive desk. Scoreboards pop up, manuscript excerpts appear with voice-over readings. There are snapshots of the discussion in the chat room. Drop-ins of writing tips from previous guests. A moody black-and-white section. There’s some serious video-fu in this show.

Peter Pop-Ups is evolving as much as any other part of Litopia.  We made the (difficult) transition from audio podcasts to live video a few years ago.  The bar for good video is much higher than for decent audio.  Increasingly, we rely on our members to keep Pop-Ups going, because it is a complex beast.  Our guests are booked from New Zealand.  Our live scoreboard is operated from Spain.  All our fabulous narrators are scattered over the globe.  It all somehow comes together live every Sunday.

We have a strong ethos of mutual help, which is far more important that any single piece of technology.  If a suggestion fits with our ethos, and is technically possible, then we’ll do it.

Roz Are you a writer as well? How did you end up as an agent?

Peter I fell into writing when a publisher suggested I should write a book for them.  It quickly sold 100k copies and became a UK number one bestseller. That hooked me.

Then I met Linda McCartney and wrote her cookbook, which was also a no 1 bestseller and sold millions of copies worldwide. I was generally dissatisfied with the representation I had, sacked the first agent, got another one, sacked that one, got a third one, sacked them and finally came to the conclusion that I could actually do it better myself.  I went to the US in my early days as an agent. New York publishing was far more exciting than here in London.

Roz I’m interested to know how NY publishing was more exciting… And seriously, many of this blog’s readers are in the US. Do you see much difference between the tastes of American and British publishers?

Peter Well rather paradoxically, NY publishing has traditionally been rather more conservative, rather more risk-averse than the Brits.  So you often have to sell a project somewhat harder.  The upside is that if one publisher wants what you’re selling, others are very likely to, as well.

There is still an insular quality to NY publishing that is rather frustrating.  However, the fruits of success are so very much bigger than in the UK.  New York is a rather flatter society than London meaning that it’s really not difficult to get a meeting with the top people in a company.  Access is a bit easier and doesn’t depend so much on “the network”.  Also, there is a real appetite for success, whereas in the UK, some parts of the business are still run on rather old-fashioned lines – I quickly grew fed up of being told rather smugly by certain London publishers that ‘publishing is not like other businesses, you know’.  Actually, it is!

Roz Have you noticed any changing trends in the kind of manuscripts people are sending you?

Peter Very little non-fiction, which is a pity.  Powerful non-fiction is the backbone of publishing.  I love polemics.  Escapist fiction is on the up and up.  Depressing teen dystopia is done for the moment, we’re already living that nightmare thank you very much.  Anything that gives us hope and inspiration is well received.  Big ideas with a strong voice are money-makers.

Roz What changes have you noticed in publishing since the pandemic started? Any words of advice for authors who are hoping to find a publishing deal?

Peter It’s very similar to what happened post 9/11.  I happened to be in front of the towers when the second plane hit, although I only saw the fireball, not the plane itself.  Immediately, they closed all exits from Manhattan island.  Everything went into “lockdown”.

It took many months for publishing to raise its head again and to figure out what sort of books they should be acquiring, and that’s where we’re at now.

Roz Authors wonder about it too. Some of us came to a standstill, wondering what to write, what could possibly be relevant in a world that had changed so much.

Peter Publishers are scratching their heads and wondering what sorts of books readers will be buying in nine months’ time. Any writer who can confidently answer that question will immediately have our attention.  Over to you, writers!  😊

PS If you’d like more concentrated writing advice, try my Nail Your Novel books. If you’re curious about my own creative writing, find novels here and my travel memoir here. If you’d like to support bricks-and-mortar bookstores (US only at present) use Bookshop.org.. And what have I been writing these past months, indeed years? This.