Posted by Roz Morris @Roz_Morris in How to write a book, My Memories of a Future Life, self-publishing, The writing business on April 15, 2012 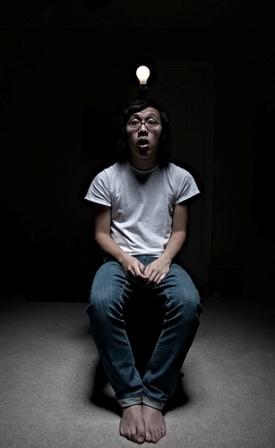 ‘Do you know how I came up with the new ending for my book?’ said my client. ‘I dreamed it.’ She went on to describe a wonky version of what finally went into the draft I was reading.

‘Pah it’s just a dream,’ she said. ‘I was also inspired by this strange thing that happened to a friend…’

‘Write that down too,’ I said.

She thought I was mad, and no doubt you do too. But there will come a time when you will be scratching for things to say about your book and you need something beyond a story summary or a sketch of your main characters.

I first realised this years ago at a friend’s book launch. I’d just finished My Memories of a Future Life and I got chatting to a publisher. I gave my prepared spiel and he nodded eagerly, wanting more. I’d run out of pitch, so I bumbled on about my favourite bits, aware that I was getting obscure, but I was so mired in the book I couldn’t see it as an outsider. What I needed was a crisp anecdote or two to keep him relating to it – perhaps about its influences or what inspired it. (He still asked to see it, though, so no harm done.)

Publicity is a long game of guest posts, interviews and maybe personal appearances. (At the moment, Dave is gearing up for the launch of his Frankenstein book app, and is grappling with interview questions. ‘What on earth do I tell all these people?’ he frequently says to me. ‘I thought it was enough to just write the story.’)

There’s only so much you can say about the novel without giving spoilers. And you’re going to be asked the same questions time and again about the writing of it, but that doesn’t mean you have to give the same answers. In fact, you shouldn’t. In each case you might reach a new audience, but the chances are, readers will see you several times before they decide to check you out. The more different – but congruent – stories you can tell about your book, the richer it will seem and the more ways you have to reel readers in. And the less you’ll bore everyone, including yourself.

And people who like stories also like stories about stories. I recently added an ‘inspired by’ anecdote to my Amazon listing for My Memories of a Future Life and sales have trebled. This experimental sample of just one seems to prove somethingorother.

What makes a good story about your story?

The very best are specific but don’t give too much away. It could be

Or it could be something left field, like my series The Undercover Soundtrack on the red blog, where writers tell a tale about their book in the context of music that inspired them while writing.

But thinking of all this stuff – unless someone gives you a specific exercise like my Undercover Soundtracks – is time consuming. And, depending on how complex your novel is, you may not be able to name all its influences at the drop of a hat. I’m still becoming aware of forgotten seeds for both of mine. They emerge by chance in conversations, revisited films and novels I dimly remember. Now I realise I might have a use for these insights, every time I stumble on another, I write it down.

Keep your stories about your stories. You’ll be surprised how easily they’ll slip your mind, but they’re as useful to you as the ideas in the actual novel itself. And you’ll never have enough.

Thanks for the pic Ben Chau

Do you have a tale about your novel? If you can tell it briefly, the floor is yours…

blogging, Dave Morris, get ideas for blog posts, get ideas for blogs, get ideas for posts, guest posts, having ideas, how to blog, how to market your novel, inspiration, interviews, literary fiction, Marketing your book, marketing your novel, My Memories of a Future Life, Nail Your Novel: Why Writers Abandon Books and How You Can Draft, Fix and Finish With Confidence, publicity, publishing, Roz Morris, self-publishing, The Undercover Soundtrack, undercover soundtrack, writing, writing a novel - Nail Your Novel, writing business, writing life