Three diagrams to make your plot a page-turner

I’ve had this question from Elizabeth Lord: I have just finished your book Nail Your Novel and found it extremely helpful for the rewrite phase of my novel. You mention graphs as a way to see where plots are plodding and character arcs intertwine – do you have any examples?

What a good question! Diagrams coming up.

First, though, a bit of explanation. Readers get bored if the plot appears to be predictable – ie the characters start with a goal and proceed doggedly towards it, step by step by step. This is a linear plot and it looks dead dull, like reading the syllabus for an education course, not a story. So when the characters have a clear goal at the start, we try to introduce developments that upset expectations. They’re going on the Orient Express? Great. Make one of them miss the train. Now everyone has a new problem that matters far more.

The major changes diagram
So your first drawing exercise is to go through the plot looking for points where you throw in a development that changes the characters’ priorities in a significant way. Make a ‘didn’t expect that’ diagram.

You want several of these developments, BTW, and they’ll probably be the main turning points in the story. Note also that they’re emotional. They’re about changing the characters’ goals – the things they want, the things that matter to them. So early in the story, they’re trying to catch a murderer. By the end of the story, they’re trying to stop the murderer killing their wife. Or murderer and detective are embroiled in a towering love affair.

The highs and lows diagram
Another helpful diagram might look at the main characters’ emotional state throughout the book. You want them to feel increasingly pressured and troubled, and you want their worst moment to be the climax of the book. So try a diagram where you look at their levels of joy and achievement versus despair. The joy part isn’t so important, although you want to give your characters a few breaks so that the disasters are more agonising – and also to show what matters to them. Make sure the despair increases in magnitude as the story proceeds. 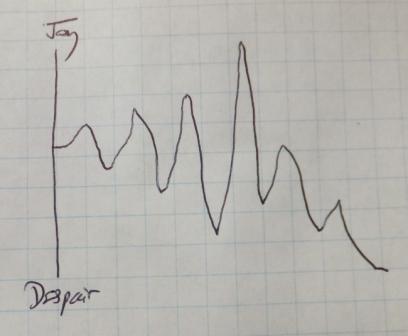 The un-convenience diagram
You can look for smaller reversals too. You might not realise you’ve made everything too easy for your characters. Every time they need to accomplish something, make it harder than they expect. Or make it backfire. You can check on this by going through your manuscript and drawing a little circle whenever you’ve thwarted your characters.

If you have a lot of little circles, you’ll probably keep your reader gripped. If you haven’t, you know to throw some spanners into their spokes.

Compare your plot strands at a glance
If you have several plot strands or main characters, you could combine them on one diagram and use different colours. Thus you will see, at a glance, how your character arcs intertwine and if you like the harmony of their highs and lows. Or you might spot a general lull where several characters seem to be having a successful run – in that case, it might be good to rework the story and introduce a setback or twist. If you’re the kind of person who has music manuscript paper lying around (how stylish of you), you could draw your diagrams on the staves, like lines for different instruments.

X-ray your plot
The serious point is this: these exercises are ways to extract and visualise important plot mechanisms that might otherwise be invisible to you, and help you fix problems with the structure and pacing. Have fun!

Elizabeth’s question was inspired by a section in Nail Your Novel: Why Writers Abandon Books and How You Can Draft, Fix and Finish With Confidence. There’s also a lot more about plot and structure in Writing Plots With Drama, Depth and Heart: Nail Your Novel 3.

Do you draw diagrams to assess your plot – or any other aspect of your book? Share them here!

authors, boring plots, characters and plot, how to keep your reader guessing, how to write a page-turning novel, is your plot a page turner, is your plot dull, linear plot, pace, plot structure, reversals in plots, story structure, writers, writing

This entry was posted on February 21, 2016, 12:42 pm and is filed under How to write a book, Plots. You can follow any responses to this entry through RSS 2.0. You can leave a response, or trackback from your own site.