Find the style that fits the story – Jose Saramago’s Blindness 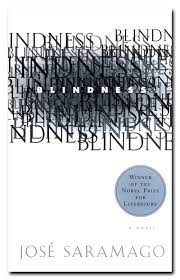 I’m reading Jose Saramago’s Blindness, and its style is rather striking. It’s an omniscient narrator hopping between a lot of heads. The dialogue is run into the rest of the prose, with no punctuation to distinguish it from the rest of the prose. Yes, no quote marks. Not even a dash. Sometimes the dialogue has no tags to tell us who’s speaking – or indeed that it is speech. When the characters speak, it’s not even presented in separate sentences, let alone paragraphed. 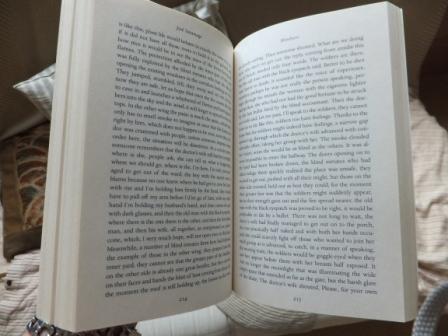 Dense, long paragraphs. Rather offputting, isn’t it? It looks like the book will be a horrendous muddle and heavy going. Dave – who will give most styles a fair crack – tossed it down in disgust, muttering about pretentious gimmicks.

It’s certainly risky to mess with the conventions of dialogue. I frequently see novice manuscripts where all the dialogue is reported. This creates a distanced effect, as if no one in the book is really alive. It also creates a dense block of text that – as you can see – looks forbidding to the eye (although not many writers take it to the lengths Saramago has). But Blindness is enhanced by this style. Let’s look at why.

The society is the focus While there are certain characters who are central, Saramago’s interest is an event that breaks the normal structures of civilisation. The omniscient view and the technique of running the dialogue together in long sentences builds on this. It means they are part of a bigger picture. The focus can be on anyone – the person whose actions are the most interesting or urgent to watch at a given moment.

The main characters become more vulnerable There are key characters, and this style creates a sense that they are more fragile. In any story that follows just a few viewpoints, we’re aware that most of them must continue as consciousnesses until the end of the book. In the dangerous world of this story, anyone could vanish and the world will go on being narrated. So the threat to them is more real.

Nothing is confusing Despite the unconventional presentation, you can usually tell who’s talking. Where you can’t, it’s either not important – or the point is to experience confusion. 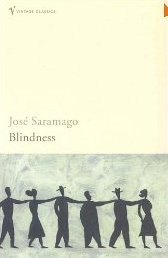 It’s set up carefully All stories have to introduce the reader to the rules of the world, and any quirks of the style. Saramago starts as he means to go on, tuning you in so you look carefully at the prose to see if someone’s talking and who it is.

He doesn’t throw us into this many-voiced chorus straight away. The first few chapters follow a limited cast, so we get to know them. This gives us figures who are anchors in the later chapters – if they survive. He assembles a large cast quite quickly, but they are connected with these originals by the establishing scenes so it’s easy to remember who’s who.

There is also a consistency of style, although this may not consciously be noticed by the reader. One paragraph – which may go on for many pages – is a scene.

The story has momentum The style may be unorthodox, but he’s keeping the story moving. Curiosity pulls us along. The stakes keep building, the situation is running further out of control. We keep reading to find where it is going.

I haven’t read very far so I’m looking forward to even more interesting effects, but my final point is this. The run-on presentation with few traditional markers is like hearing a lot of voices and being unable to tell who is who. Isn’t that like being struck blind? It is also panicky, as though things are happening too fast to take proper note of them. It feels out of control (although the writer is tightly in command). You might even say it’s breaking convention as the society of the book is disintegrating. It makes the characters disturbingly into a herd, stripping them of individuality. This clever style choice reflects the experience of the sighted people, who have quarantined the blind people for fear they will catch it. We are at once seeing the story two ways.

This style is creating and amplifying the experience of the world. Wow.

No spoilers, please, as I want to discover the book’s surprises in the proper way… but let’s talk about styles. Have you read a novel with an apparently challenging style that enhances the material?

This entry was posted on August 24, 2014, 6:55 pm and is filed under How to write a book. You can follow any responses to this entry through RSS 2.0. You can leave a response, or trackback from your own site.